We also had tons of fun with the Sweeny family who came to visit in July!  Mom got here first, followed by Ben and Maria a couple days later, and then Whitney the next day for a few hours.  Anne and Jason drove out a couple days after that.  We played LOTS and loved it!  Again, we took scooter rides, played with Roxy (who Roan hated!), played Kinect, went swimming, did hikes, went to the Dinosaur Museum and Animal Farm at Thanksgiving Point, played at the park by our house, went mini-golfing, played tennis, and probably lots of other stuff I'm forgetting.  We miss these fun aunts, uncles, grandparents and cousins and wish we could play together WAAAY more often.  Alexa keeps asking for them!  And it was cute that she kept asking for Grandpa because Grandma was here without him.

Random story--we took the kids mini golfing like I mentioned previously, and they were so excited because they closed down all of the courses nearby in Indiana.  Corbin was a natural and picked it up really fast.  I don't think that they had seen black lights before either (they have them on the indoor course we did), and Wylah was excited to see what glowed.  I was explaining that anything white glows--even your teeth--and she said, "I wonder if my skin will glow?!?!"  It made me laugh really hard. 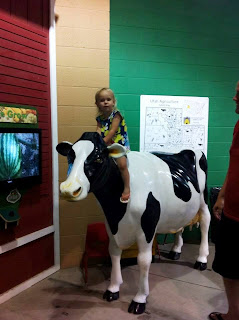 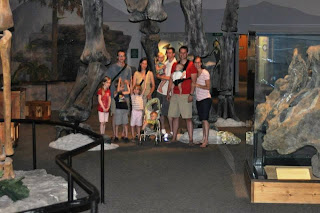 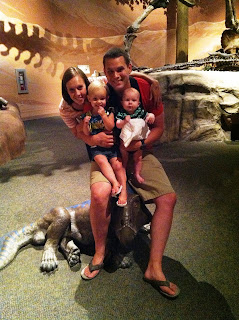 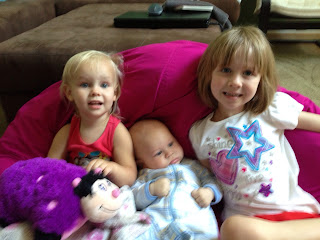 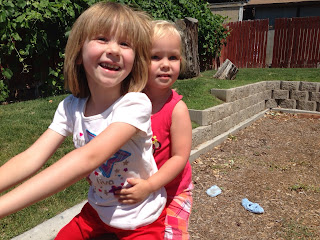 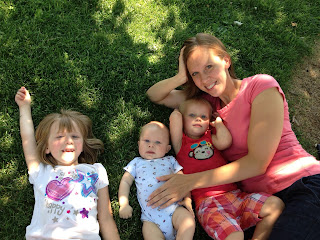 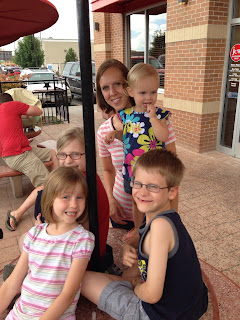 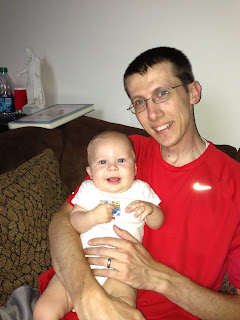 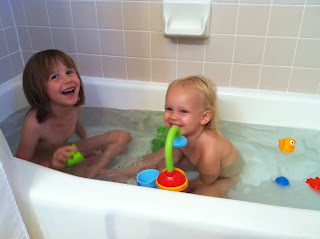 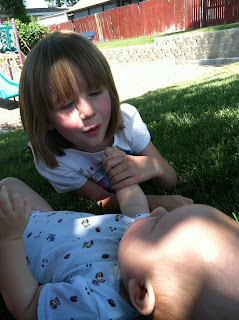 We had lots of fun with Sara, Preston, Damien, Olivia and Charlotte.  It was great to meet cute, sweet Charlotte.  She melted my heart--she's soo happy, I love it!!  We had lots of fun with them here for a few days--took scooter rides with the kids, had a cousin dance party (my favorite part!), took the boys and Alexa to see Monsters University (Alexa spent most of the time climbing up and down the theater steps -- her attention span is apparently not ready for a movie in theaters yet!), had a fun BBQ with Todd & Melissa and the Singleton clan, played with the sprinklers and Roxy, and cleaned up lots of puke from those poor, sick kids :(. 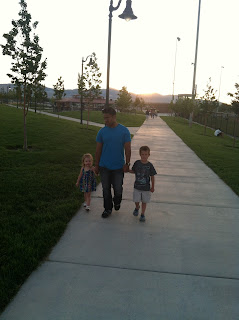 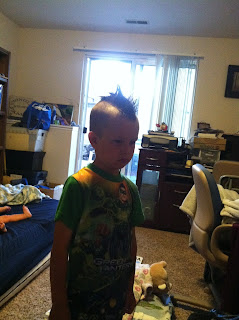 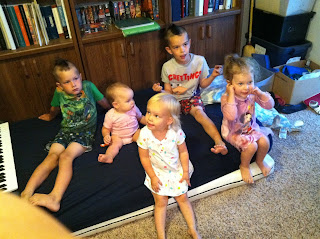 Then, a couple weeks after the Luna clan came, we got a surprise call from Emily saying she was in Utah!  She drove up from Blanding and visited us for the afternoon/evening.  We loved it!  Sadly, Todd was out of town, but we got to play with Melissa.  We all went mini golfing and out to Cafe Rio for dinner.  Aiden is getting so tall and we wish that he, Emily and Jered lived closer so we could play MORE!!!

Whew, it's been a busy month!  We've had lots of visitors, and it's been GREAT!!!  It's been so nice to have so much family around.  If only we lived closer to each other.  Sigh.  We started out with Sara and kids, who stopped on the way from Wisconsin to California.  She's amazing -- drove alone with 4 kids from 9 months old to 6 years old.  They stayed longer than they thought because all of the poor kids got each other sick and were throwing up.  Poor Sara.  But we LOVED having them longer so it worked out.  Next came my mom (from Indiana) and my brother Ben and niece Maria (from D.C. and Iowa).  Maria is Alexa's favorite cousin and she was soo happy to have her here with us again to play together.  Then Whitney stopped by for a few hours in between a cousin's wedding and reception.  A couple days later Anne and Jason drove out from Indiana with their kids, and we had soo much fun running around and playing with them, too!  In the middle of that week, Emily and Aiden surprised us with a visit from New Jersey, so we spent the afternoon and evening with them for a quick visit.  And then Kyle's cousin, Aaron, stopped and stayed with us that weekend on his way from California to Southern Utah.  Oh, and Malori was out here from Florida at the same time.  It's so quiet now--we don't know what to do with ourselves!  And Alexa wants to know where everyone went!!

I'll write a quick family update and then share some of our family adventures and pictures in a different post.  Sweet Tyler can now hold his own bottle thanks to all of his extra feedings.  He is also finally taking to solid foods.  We tried to give him rice cereal and mashed bananas a month ago and he would just scream and cry every time, so we stopped after a week and figured that we would try again.  So far he seems to like everything random we've given him -- applesauce, bits of bread, tiny pieces of freeze-dried brocolli, mashed blueberries, and mashed grape pulp.  He is starting to sit up a little, and has also started babbling a lot and sucking his thumb. He's interested in toys and holding onto or grabbing things (including my plate at the dinner table).  Oh, and blowing lots of raspberries. He often pulls off from nursing to smile and spit on me :). We put him in the room with Alexa about a month ago, and I would still nurse him once during the night. With all of this family around, I’ve nursed him right away when he wakes up so that he's quiet, so now he’s spoiled. And Alexa is suffering from lack of sleep, so tonight we banished Tyler back to the basement to get back into good sleeping habits for a few days. He has normally been waking up at about 4am to eat, but some nights (like last night) he’ll do 1 or 2am. No bueno.  I just read my blog post from a month ago, and he was sleeping from 7:30am until 6 or 7am.  Looks like we've digressed.  Alexa still loves to feed him his bottle, and often says "Tyler's bottle will make him mortal!" (like Hercules).  Haha. 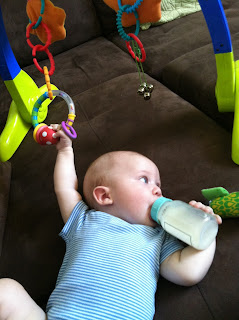 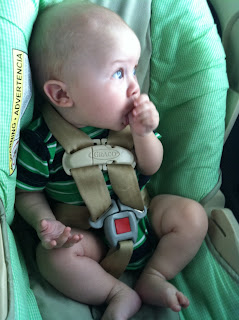 Alexa is catching on to the fact that I have to pump every time I nurse Tyler, and she offered to pitch in and help while I was changing his diaper-- 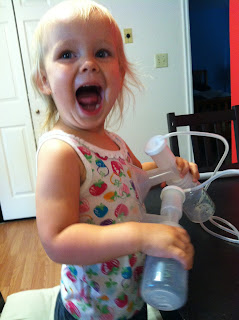 We finally remodeled our downstairs bathroom after having it on our to-do list since we moved in!  Poor Craig never had his own shower while living here, just a jetted bathtub.  We painstakingly re-tiled the bathroom and installed a shower.  Kyle and I both have a love-hate relationship with the bathroom now because it was such a huge pain.  However, I will say that it looks awesome and will be so nice to have down there!  We were just thoroughly exhausted. 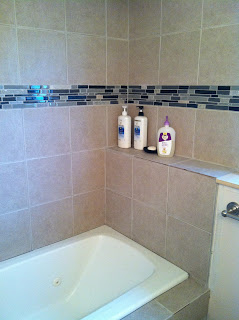 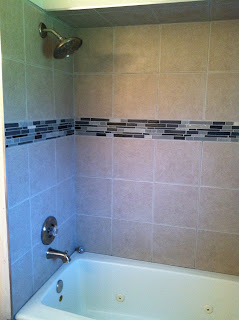 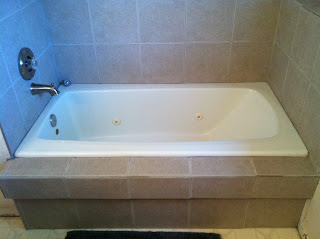 Alexa's big news is that she has been taking swim lessons.  She's doing really well and learning to blow bubbles to the fishies and float on her back all by herself for at least a minute.  These lessons start at like 6 months to teach kids not to panic if they're in the water and how to save their life by knowing how to flip on their back and go to the wall to get out.  It's fun to practice with her and see how fast she's learning, although she does have a lot of meltdowns because they are somewhat traumatizing for her.

Another Alexa story...Let me lead up to it.  When I was a small child, my parents took an all-day trip to the temple (at that time they went to Chicago, which is about 5 hours one-way) and left us with a babysitter.  Apparently, I opened our giant tub of peanut butter and covered myself with it.  Head to toe.  I've never been able to live it down.  Well, a couple weeks ago, Alexa found a tub of vaseline on top of her changing table during her supposed nap time, and I consider it payback for my peanut butter incident.  She COVERED herself with it, her crib, the dresser, inside her dresser drawers, anything lying within reach of her crib, etc. etc.  Kyle called me at work and was not a happy camper.  Needless to say, we are still finding vaseline in random places in her room.  Oh, and it doesn't wash out in case you're wondering.  Her hair was greasy for days.

Since it's blisteringly hot and swamp coolers like ours only work with windows open, we have had more flies in the house lately.  Alexa loves chasing them and calls them "butterflies!!"  It's the worst when there's one in the kitchen while we're eating because she is 100% distracted with trying to catch it instead of finish her food.

Continuing on the theme of Alexa stories, she's been working out in the mornings with Kyle and I, which is unbelievably adorable because she tries to copy us and she's so stinking cute!  Anyway, the other day we were doing a leg work out and she said "Daddy has a big bum!" out of nowhere.  I laughed, of course, and wouldn't let Kyle live it down.  However, 10 minutes later she said "Mommy has a big bum, too!" and it wasn't as funny anymore :).

I mentioned on Facebook that she is learning a little more Spanish, which we love.  The Spanish books and Dora the Explorer are working! She says random things like "abre," "arriba," "abuelita," "guacala," "delicioso" and she'll repeat us with counting, colors and animals.  And in English she's totally been counting to 15 all by herself for a month!  Such a smarty pants. 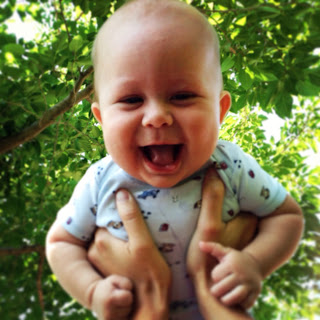 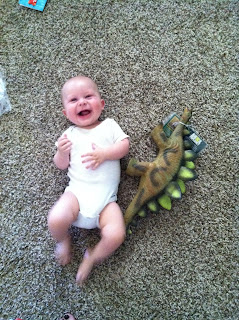 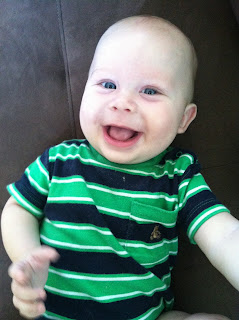 We love living close to my great-aunt June, who is soo sweet with the kids.  Whenever we go to her house, she gets out stuffed animals for Alexa to play with.  When she came to our house this week (to bring Alexa a box of twinkies after going grocery shopping), Alexa immediately ran and started giving Aunt June all of her animals.  I couldn't resist snapping a photo. 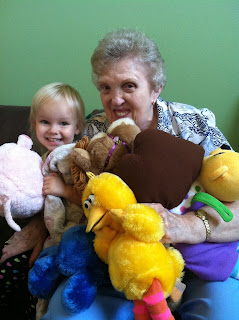 Last photo -- my cute kids talking to each other and patiently waiting for me to fix their lunch today. 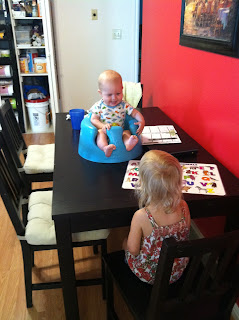