We’re up at Snowbird (a Utah ski resort) with Grandma Sweeny for the weekend, and Alexa happily brought her book after book to read to her while I made breakfast this morning.  She even brought Grandma a book about pets in Spanish, and Grandma was a total champ and just made up the story to go along with the pictures :).  People are napping, so I thought now would be a good time for a blog update. 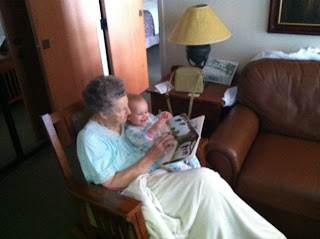 Alexa's new big thing is praying.  We sat down for lunch the other day and Kyle and I both took a bite of food and looked over to see Alexa sitting there in her high chair folding her arms and staring at us.  Haha, oops!  We stopped to pray with her before taking a second bite :).  She keeps us in line. Last Saturday we prayed four times during lunch per her request.  She'll fold her arms and just stop eating and smile at us.  She hardly ever says "amen," and instead just claps and says "yay!" when the prayer is done.

We've discovered the wonder of Baby Einstein--she will seriously sit completely still and watch the whole show, even though she won't sit still for cartoons (even involving puppies!) or Disney.  It's amazing what you can get done in a half hour when she's sitting still.  Here she is watching it on Saturday morning while eating a banana, which I considered to be the perfect breakfast for a little girl in monkey pajamas. 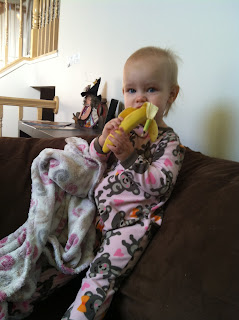 She loves to give us kisses, hugs, and pat us on the back.  If she can't reach my back, she'll walk up to my leg and give it a hug and pats it like she's giving me a real hug.  Every night after family prayer she'll say "hug!" and run up and give us both hugs and then "kiss!" and give kisses.  And then say "love you!"  I was leaving for work one day this week and she said, "bye bye, love you!"  Yeah, definitely didn't want to go to work after that.

Some of you may have seen that I posted on Facebook about her hiding peas in her high chair last week, too.  It has already started!  She found a hole in the chair behind her head and I caught her shoving veggies in there.  Reminds me of Adam Sweeny...  When she's being a punk about eating, Kyle can (sometimes) get her to keep going by telling her to take a "dinosaur bite," where she roars and then takes a big bite of food.  It's pretty awesome.
Kyle loves taking her on the slides at the playground because she does this maniacal laugh when she gets to the bottom:

More pictures of Lexi bundled up to play at the playground: 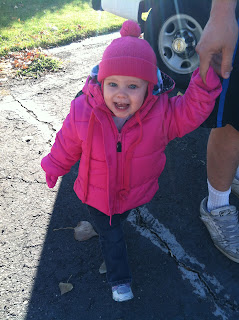 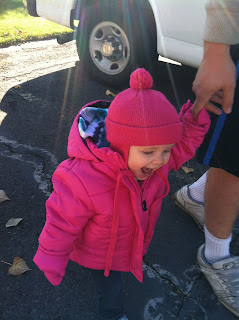 And for those of you wondering what we did for Halloween, Kyle requested that Alexa be an ewok so that she could run around babbling like her usual self.  The rest of the family went in line with her costume by being Vader and Princess Leia. 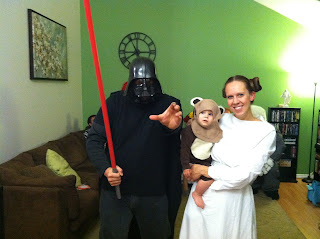 Oh, and we celebrated Day of the Dead that same week with some friends, so here's Mexi Lexi.
We took Alexa to a BYU Basketball game a couple weeks ago with the Ludlow family tickets.  I thought she would love watching the game because it has a ball (she loves playing with balls and saying “ball” repeatedly), but come to find out she was much more interested in just playing with the people sitting around us in the stands.  She was flirting with everyone—saying “hi” and smiling at them, waving, etc.  The guy behind us had some ice cream and she paid particular attention to him.  Smart girl.  She also had lots of fun with the lady sitting next to us.  At one point she reached over and poked her nose and smiled and said “nose!”  I apologized profusely, but she just laughed and encouraged Alexa to do more. 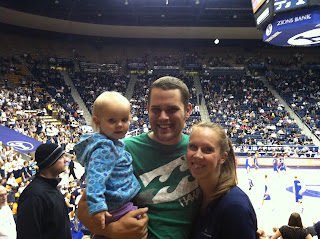 I’ve been on a sewing kick lately, and here are a few of my recent projects. 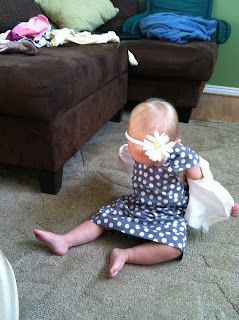 I also made a carseat cover for this new baby on the way, a portable high chair for Alexa (fabric and velcro that loops through a chair to keep her trapped), a steering wheel cover for the Nissan because it stays freakishly cold in cold weather, and two stretchy maxi skirts for me and my big belly.  Today marks 28 weeks.

Video of Alexa reading an animal book with Kyle.  She loves watching it.  It was too big to upload to the blog, so I put it on YouTube:
http://www.youtube.com/watch?v=TXXOiFXF_8s&feature=youtu.be

She's starting to put words together into small phrases, and her vocab continues to grow daily.  She will repeat almost everything.  My favorite new word this week is "cool!"

Side note.  This is probably too much information for most of you (stop reading if that's the case), but I lost a giant thing of placenta at a wedding reception the other week and it scared the living daylights out of me.  I thought the baby was trying to crawl out!  It turns out that it was just a chunk of placenta that broke off from my tear and clotted up.  I seriously thought I was about to have a baby at 26 weeks in the bathroom at a wedding reception....whew.