We started out April very busy at work with the Shelf Reliance annual convention up at the Salt Palace.  I stayed up there Thursday morning through Saturday night and ran around making sure things went smoothly with registration, workshops, the AV Team, slide layouts, that the owners actually stopped to eat, etc. etc.  We normally had meetings with the AV Team until 2 in the morning to prep for the next day, and were up early in the morning with the consultants.  It was lots of fun!  The executive team even dressed up as an 80’s band for the final group session and performed some Bon Jovi and Air Supply.  They were in a band together in college, so I think this was like a dream come true.  Luckily, I was fortunate enough to use my amazing musical talent to help make up some lyrics to their songs that had to do with the company.  We also had a FANTASTIC guest speaker, Kris Belcher.  She travels a lot doing motivational speaking, and was phenomenal.  I laughed so hard that I was crying.  She’s blind, and told some great embarrassing moments in addition to her motivational message about not letting people tell you that you can’t do something when you believe in yourself.  My favorite story was when she went to a public restroom and used her cane to find an open stall, went in, closed the door, and pulled down her pants.  When she went to sit down, she said she felt hair!!  She reached her hand down and felt a tiny head, realizing that she had just walked into a stall with a little kid who didn’t lock the door, pulled her pants down in front of him, and then sat on his head!  She said to him, “Did that scare you?,” to which he responded, “uh huh.”  Hahaha.

Just a few days after convention, we jetted off to Israel and Egypt for a trip of a lifetime.  I don’t know how to summarize that trip in a couple of paragraphs, but I’ll give it a shot…I have a photo album posted here (http://www.facebook.com/media/set/?set=a.10100476112403899.2531430.17802553&type=1&aft=10100476130213209&l=63df0c114e), and most of the pictures have descriptions and explanations underneath.  It was an amazing trip!  Thank you soo much to Mom and Dad, as well as Grandma and Grandpa Ludlow for the generous opportunity to go.  It was really neat for me to think that we were able to use inheritance from Grandma and Grandpa to go to their favorite place in the world.  There were lots of times there that I could sense how much they loved Israel.  Mom and dad split up the trip and assigned each of us a couple days to research and plan, which helped internalize a lot of the sites since we had to study and then teach the rest of the group about them. We spent the first 5 days in Jerusalem, and our balcony opened right to the Dome of the Rock—incredible! 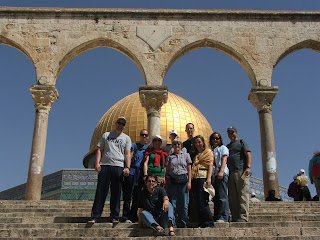 We visited lots of amazing sites every day.  My favorites were the Garden Tomb, mosaics of women in the Bible at Dormition Abbey, and the Yad Vashem Holocaust Museum.  Yad Vashem was very powerful, and I was very moved by the section about the sacrifices and risks taken by so many to save the Jewish people.  I really liked our British (protestant?) guide at the Garden Tomb, who said that we celebrate the fact that Christ is not here, although He can be found in the tomb if you take Him there in your heart. 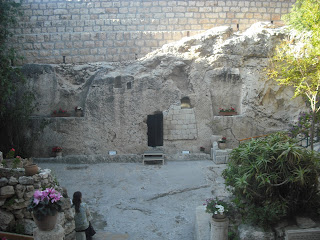 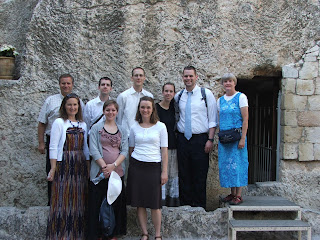 I also thought it was neat that the Church of the Nations at the Garden of Gethsemane stays dark all the time so that when you walk in you remember what it was like for Christ at night in the garden.  While in Jerusalem, we got to meet Walter Rane, who is one of my all-time favorite Church painters (http://www.walterrane.com/); saw a $10,000 hand carved nativity at Omar’s Shop (breathtaking amazingness); and played lots of cards every night with the family when we got back to the hotel.  We had to be back by 6 or 7 because it wasn’t safe to wander at night.  All our hotels served us a breakfast and dinner buffet (great idea on a vacation).  It was really neat to see all of the history behind the city of Jerusalem, and realize that so much of it is still visible, but sad that it is so  commercialized and there are churches or cathedrals everywhere for supposed things that may or may not have happened.  For example, there are 4 churches where Mary was buried and they all say that they are the right one.  I loved the cultural diversity, though, especially learning more about the Jewish and Muslim people in the area.  I am so glad we went while Jared & Margaret were living there, and loved their insight at so many of the sites.  Seeing so many of these sites in Jerusalem, and then especially later in Galilee, really made the scriptures come alive.  It made me realize even more what a master teacher Christ is, and the significance of the locations where he taught to make the message He bore that much more powerful.

After Jerusalem, we spent another 5 days driving around the Dead Sea/Masada area, Tiberias/Sea of Galillee, Jordan River, and Tel Aviv and the Mediterranean Sea coast.  We drove past Jericho, which is the oldest city in the world that’s still occupied, although part of it was burning and our rental cars weren’t allowed in because it is too dangerous right now.  I loved going to Church in Jerusalem because the Jerusalem Center has an amazing view of the City, but then our Church (really a house) in Tiberias was right on the Sea of Galilee and they said the sacrament prayer in Hebrew, which was really fascinating.  All congregations in Israel meet on Saturday instead of Sunday.  Christ really spent most of his ministry in the Galilee area, not Jerusalem, so I'm glad we had so much time in that area. 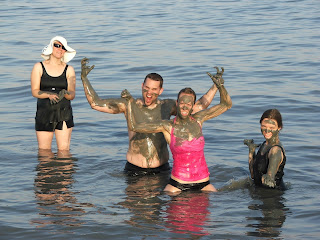 We spent 2.5 days in Cairo on the way home, and I’m really glad we decided to do that.  Egypt is really dirty and run down for being so developed, but it’s mostly because of the corrupt government.  The corruption also makes it more dangerous, and so the government issued our group a private security guard with a semi-automatic (SMG) on one hip and a pistol on the  other.  He went everywhere with us, or at least accompanied us to the entrance of every museum and our hotel. Crazy.  We saw the pyramids of Giza and went inside one, rode camels around them, went to the Cairo Museum and saw the artifacts from King Tut’s tomb and lots of mummies.  One of the mummies, Merneptah (I think?), was the son of Ramses II, who historians think is the one who followed Moses and the Israelites into the Red Sea and drowned there.  His mummy is very white compared to the dark black of the other mummies, which is due to the amount of salt he was exposed to in the water.  He is also missing a toe and chunks of skin probably eaten by fish.  Holy cow.  It was incredible to see the faces, skin, and hair completely intact on the mummies, and to know that scientists still can’t figure out how to preserve a body that long. 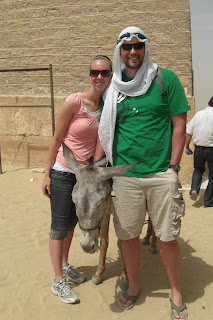 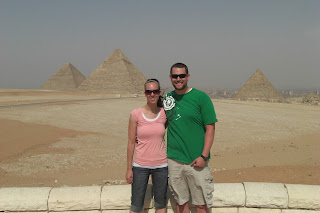 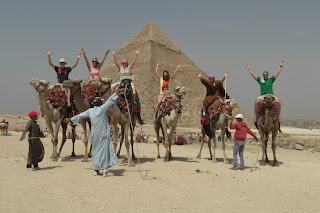 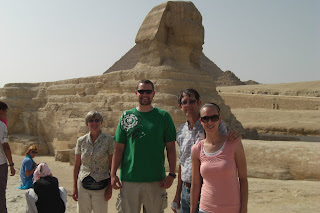 We owe Emily a TON for watching Alexa during the trip!!  She was wonderful to take such great care of her even though Alexa was apparently a beast.  She slept badly (waking Emily up at 5am on her birthday!), got two teeth while we were gone, and even pooped on the living room floor!  Thank you, thank you!!!  It was so nice to be able to see Emily, Sara, and all the nieces and nephews in Chicago.  Wish we lived closer!

Craig got his mission call literally the day we left (talk about lousy timing), and will be going to the Belgium/Netherlands Mission on August 22nd.  He just left on Sunday to head back to California and spend the summer at home before he heads out.  The house already seems more quiet and empty.  It was great to have him here with us for almost a year.  He was a big help around the house and with Alexa.  She loves her Uncle Craig! 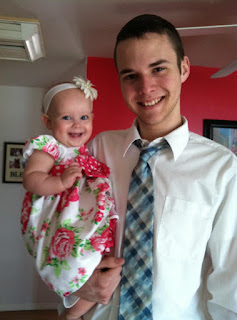 We just celebrated Alexa’s 1st birthday last week.  Like everyone says, it goes unbelievably fast!  She got her 12 month shots at the doctor on Friday, and the nurse was smitten.  Alexa was her usual flirty, giggly self while being weighed and measured, screamed when the nurse held her legs down to give her the shots (not when the shots went in, just because she was being held down. Spaz), but then immediately smiled again when she was let go.  The nurse said she’s the happiest baby she’s ever met, so she gave Alexa her first lollipop. 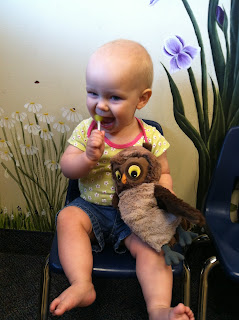 We FINALLY started cloth diapers this week.  I know, pathetic.  We’ve had them (thank you, family!) forever, but always make excuses.  Anyway, we’re giving it a try. She’s soo close to walking, and will even take a couple steps without holding on to anything!  Getting there. 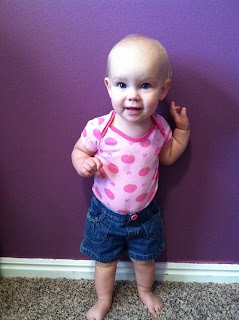 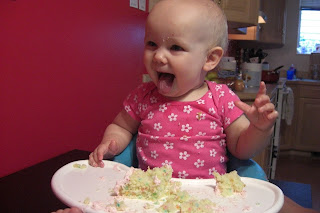 We’ve also been busy spring cleaning the house.  I think that oven cleaner must cause cancer and should be avoided at all costs—I swear I was literally breathing in poisonous fumes while I cleaned on Saturday.  However, feels good to slowly dejunk and clean things out…

Well, I think I’m done with my novel for now.  This is soo long!  Hope you enjoy!  I would love your comments and to hear how you are all doing!
Posted by Swingle Family at 10:45 AM 1 comments