Our rough week in summary:


Sunday - Alexa biffs it at church and lands on her face.  Bleeds all over Kyle and looks like she got punched in the mouth.  Poor girl.  Later that day, she was outside playing with her favorite toy at the Family Reunion, Roxy the dog.  Roxy lovingly puts her paw on Alexa's face and ends up scratching her--three perfect claw marks running all the way down the side of her face.  She still wanted to play with Roxy though, and was mad we took her inside to clean her up and take it easy.  Here's a video of her "talking" to the dog (growling) earlier in the week.


Monday - Dad is sick starting Sunday and going through Monday.  He is nauseous, pale, light headed, and spends most of the reunion in bed.


Tuesday - Kyle wakes up early and throws up until there's nothing left.  Spends the day tired and miserable.


Thursday - Jenny (12 weeks pregnant) is on her way to work and starts bleeding a lot all of the sudden, so she turns around to go back home.  The Dr. rushes her in for another ultrasound, and we find out that there's a tear in the placenta that's causing a lot of blood loss. Baby still looks good and has a great heart rate, but if the tear doesn't heal itself there's still a small chance of miscarriage. Have to stay off my feet as much as possible for the next week until they check again, which is really hard to do!  Especially with a 14 month old who can't exactly put herself into her crib or highchair at this point.  I'm feeling much better and the bleeding had stopped by Friday.  Just weak and tired off and on.
Friday - Kyle flies off the scooter on the way to work.  He takes a nice slide on the road, which they lovingly pick out of him at an Urgent Care Clinic.  Luckily, nothing is broken, but he is very scraped up and sore.  He thought he broke his toe, but it was just a blood vessel that burst under his toenail, so they burned a hole through his toenail to release all the blood/pressure.  Burnt toenail is an interesting smell....We're glad he's ok.  Went to Wal-Mart Friday night to get milk and Jenny rode around in an electric cart with Kyle the gimp walking beside. 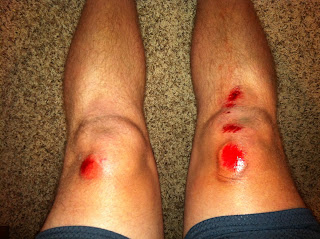 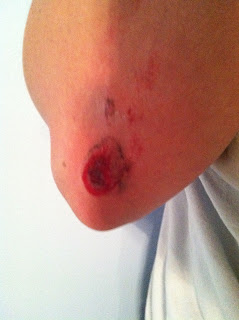 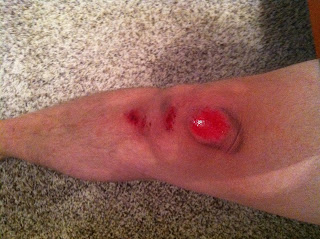 We've been lucky to be around so much family these past couple weeks.  Aaron and Carrie came to visit Thursday night (a week and a half ago, I'm behind...) and spent the night with us.  It was great to meet Carrie and see Aaron again! 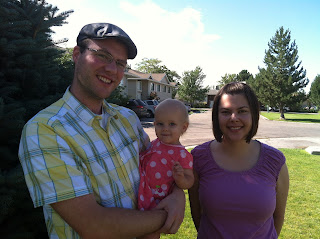 Then we went off to the Ludlow Family Reunion in Midway on Friday.  We spent most of the day Saturday at Deer Valley on the beach, boat, and kayaks.  Mom, Dad, Adam & Karen's family, and Ben and Maria came out for it, so it was great to have so much immediate family out in Utah! 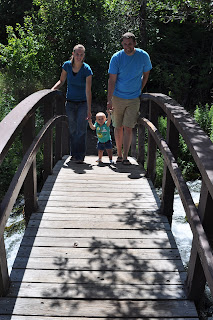 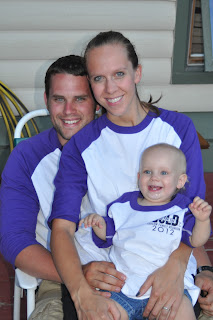 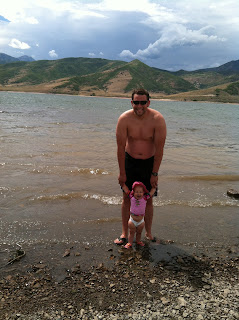 Brendan and Whitney drove out to Utah the next week and got to stay with us Friday night.  We had lots of fun playing with their kids and visiting with everyone!

Great video of Maria getting Alexa to laugh for a solid 10 minutes :)

We have an official WALKER!  We no longer have to bribe Alexa by dangling toys in front of her so that she'll walk.  She does it on her own all the time now!  She's been able to walk across the room for the last month, but will only do it if one of us is on the other side with our arms wide open or like I said before, dangling food or toys.  But, as of last Monday (a week shy of 14 months), she decided to just up and do it on her own.  Yay!  Here's a video to prove it. 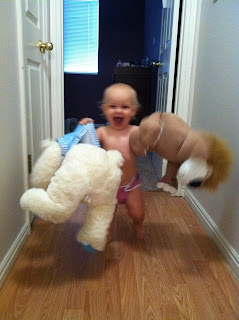 A couple more stories, mostly about Alexa because we're obsessed.  She has recently discovered that emptying her diaper bin full of soggy, poopy cloth diapers is so much fun and that I respond in a delightful way.  It's amazing what small children can do in the short amount of time you're in another room!  Anyway, we had a nice chat about how disgusting that was, sanitized her entire body, the floor in her room, etc., and I'm sure that the chat really sunk in because she went right for it again.  I even put a 10 pound weight on top thinking that would stop her, and she looked at me, pushed it off, and tried to open it right there in front of me.  What a stinky yeti.  The diaper pail now lives on top of her bookshelf until I can find a more suitable home out of her reach.

She LOVES jumping in her crib these days, and I think it's absolutely adorable, although it does discourage naps.  I usually know that she's awake from a nap now not because I can hear her begin babbling, but because I hear the springs start squeaking from a little bouncing body.  She always has a big grin on her face.
She also loves saying hi to everyone, and I think it's appropriate that it was her first official word that she knew what it meant and said on her own since she's such a social little girl.  She also says puppy, whee, uhoh, bye bye, mama, and dada. She's now up to five teeth with a sixth poking through.

Kyle was released from the BYU Bishopric, and though he knew it was a year calling going into it, it was very bittersweet.  He cried when he had to say goodbye and is already missing it.  It was sure nice to sit next to him in church today and have him play with Alexa, though!  She also thought it was absolutely fantastic to have so many kids to play with and immediately made great friends with a 5 and 3-yr old sitting behind us--they passed toys back and forth and giggled themselves silly during sacrament meeting. 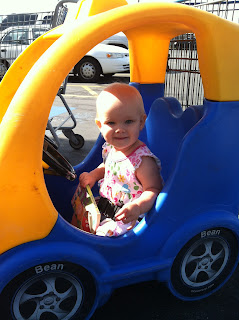