We have so much more stuff than I realized...but we eventually got everything to the new house in Lehi.  We're ripping it apart at the moment, but will eventually throw up some photos of the work we're doing and layout of the new home.  We had a last-minute issue where Lehi City wouldn't let us move in because there was a lien against the house that their broker didn't disclose, which pushed back the move-in date.  We cut a deal to move in a week later, but still couldn't get under contract because the utilities weren't switched over and approved by the city.  The house was on sewage, well water, and propane but had to have everything switched to city utilities before we could officially transfer ownership.  So we "rented" our new house for a couple weeks, and scrambled to move in on a Wednesday night because we had to be out of our house in Orem by that Friday.  It was really bittersweet to leave the keys and say goodbye, we have had so many memories in that house.  Including three cute little boys who were born there.  We moved in when Alexa was 4 months old, so all of our kids have grown up there.

We hurried on laid a new layer of shingles as part of the selling and moving process in Orem.  It was hot, long work and made me grateful for really good friends and neighbors, as well as the fact that I am not a full-time roofer! 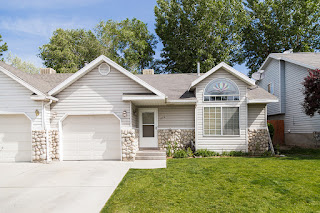 We are in love with the new home and space.  We have all enjoyed going out and running around in a huge backyard together and playing tag after dinner in the evenings.  Nothing beats a great backyard in the summer.  We have wonderful neighbors and the kids have made friends quickly, although Alexa still cries occasionally because she misses her old friends.  Our kitchen table was ironically one of the last things to come over, so we ate our meals on the front porch for a couple of days.  Honestly, it was heaven.  The first day we moved in our sweet Alexa found some wildflowers and unprompted put them in a water bottle to put on our "table" outside.  We sat there eating in camp chairs and I was overwhelmed with how blessed and happy I felt.  We only have neighbors on one side and they're on the far end of our rectangle-shaped 0.60 acre lot.  We ate outside in peace surrounded mostly by horse fields and dirt.  Eventually that will change because the area behind us will be developed into 1/2-acre lots, but for now we are really enjoying the space to ourselves.

We will spend the fall and winter renovating some of the inside of the house--rebuilding the stairs, new flooring on the main floor, repainting, rebuilding some (or all?) of the kitchen, putting in an office / guest bedroom, and building out a new pantry.  Kyle demoed the stairs within the first couple weeks with Quinn's help (thank you!), so we climbed up to the second floor using a ladder for a couple days.  It was fun holding baby Liam in one arm, his bottle in the other hand, and then climbing a ladder to lay him down for a nap...in his crib on the second floor.  The kids thought it was the best house ever--climbing a ladder to get upstairs was awesome!! 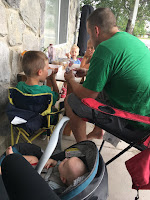 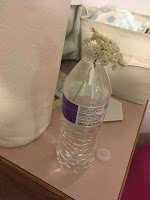 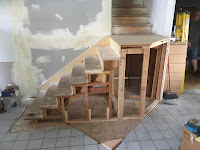 Before the move...we had fun celebrating the 4th of July.  The kids convinced me to take them to the parade, which was fun and full of princesses much to Alexa's great joy.  Tad loved all the horses.  Alexa woke up early that morning and made a sign to decorate the door so she could wish everyone a Happy 4th of July. 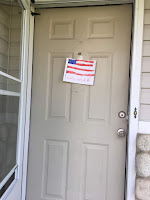 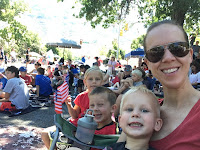 Casey and Jess also invited us out on their new family boat.  It was beautiful weather and a busy day at Jordanelle.  Alexa was the only kid who wanted to go on the tube, Tyler had absolutely no interest whatsoever.  Kyle was feeling sick so he stayed home with baby Liam. 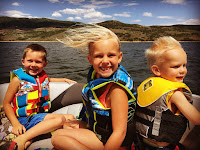 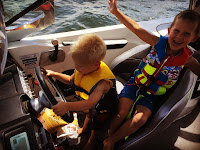 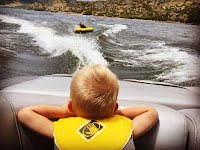 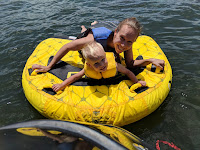 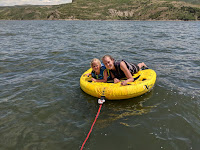 We are happy, healthy, and grateful.  And Liam discovered Cheetos and black beans.  He says they are both delicious. 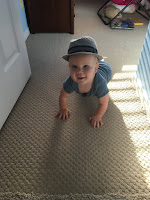 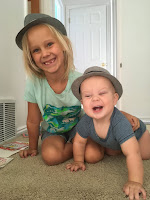 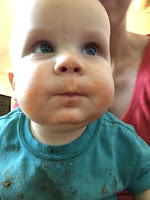 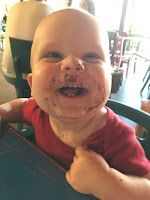