I love that Alexa loves books so much.  One of her favorites is Brown Bear, Brown Bear, What Do You See? (thanks, Anne!), which we will even sometimes recite together from memory while we're driving in the car.  A couple weeks ago I caught her doing it with random things around the house like her penguin bath toy.  She was holding him and saying, "penguin, penguin what do you see?"  In addition to books, she currently also loves Disney princesses and listening to the Disney Pandora station.  I came downstairs the other day and she was loudly singing along to "Let's Get Down to Business" from Mulan.  She was singing word for word and waving around her plastic sword from the dress up box.  She looked at me and said, "I have to get down to business, Mom!"  Yes, you do.  And it's awesome.

Oh, and another princess story.  We had some weird warm weather spikes in February that even brought out a few flowers, and Alexa picked one from outside and came in proclaiming it was "a flower from her one true love."  Haha.  She continues to do well at learning some Spanish and is increasing her vocab little by little.  We even created a YouTube playlist of Frozen songs in Spanish, so that is a hit and she loves reading some of her Spanish books with us.  When Kyle left for work the other day she said "Te Mamo! Drive safe to work!"  (Te amo means I love you, but I love that she said "mamo" instead).

She has recently started wanting to do pull ups with us and she's actually really good.  I was impressed.  Here's a video of her doing 10 pull ups and I wish I kept recording because right after she said "whew, I'm sweaty." :)


Alexa continues to be somewhat of a drama queen and loves being a big sister.  The other night at dinner she said to Tyler, "Clap for me, Tyler!  [I'm eating and] I'm amazing!"  She's a humble one, that Alexa.

We had a really, really fun time at the Midway Ice Castles (thanks, Casey and Jess!) before they closed in February.  It's a manmade Ice Castle that they "grow" every night after they close.  We even happened to go on accident when they had Frozen characters there.  They were beautiful and we all loved it.  They even freeze LEDs into the ice so that it changes color and lights up at night.  They had to close early because of the unusually warm weather, but it sounds like they will be back in 2015. 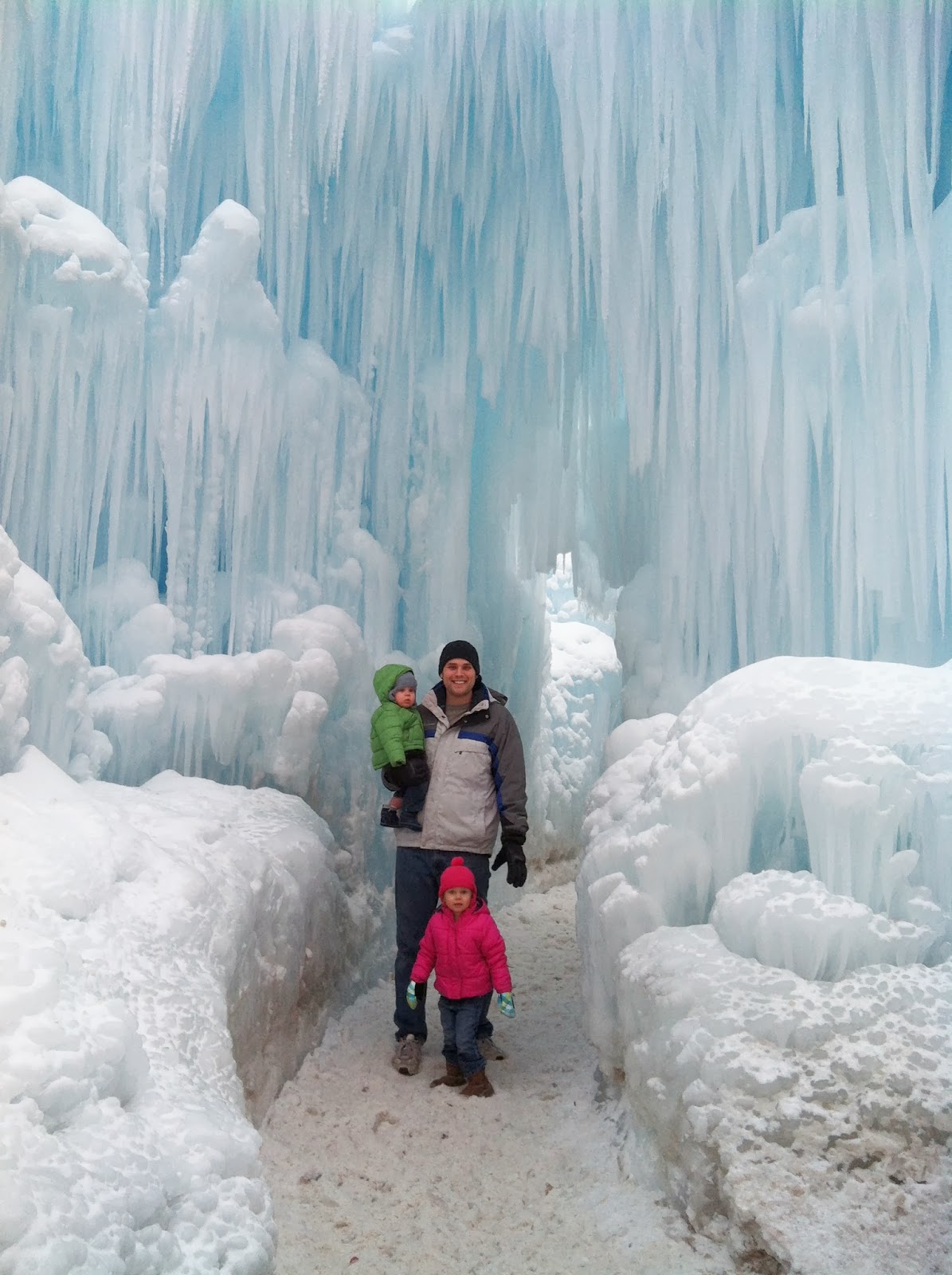 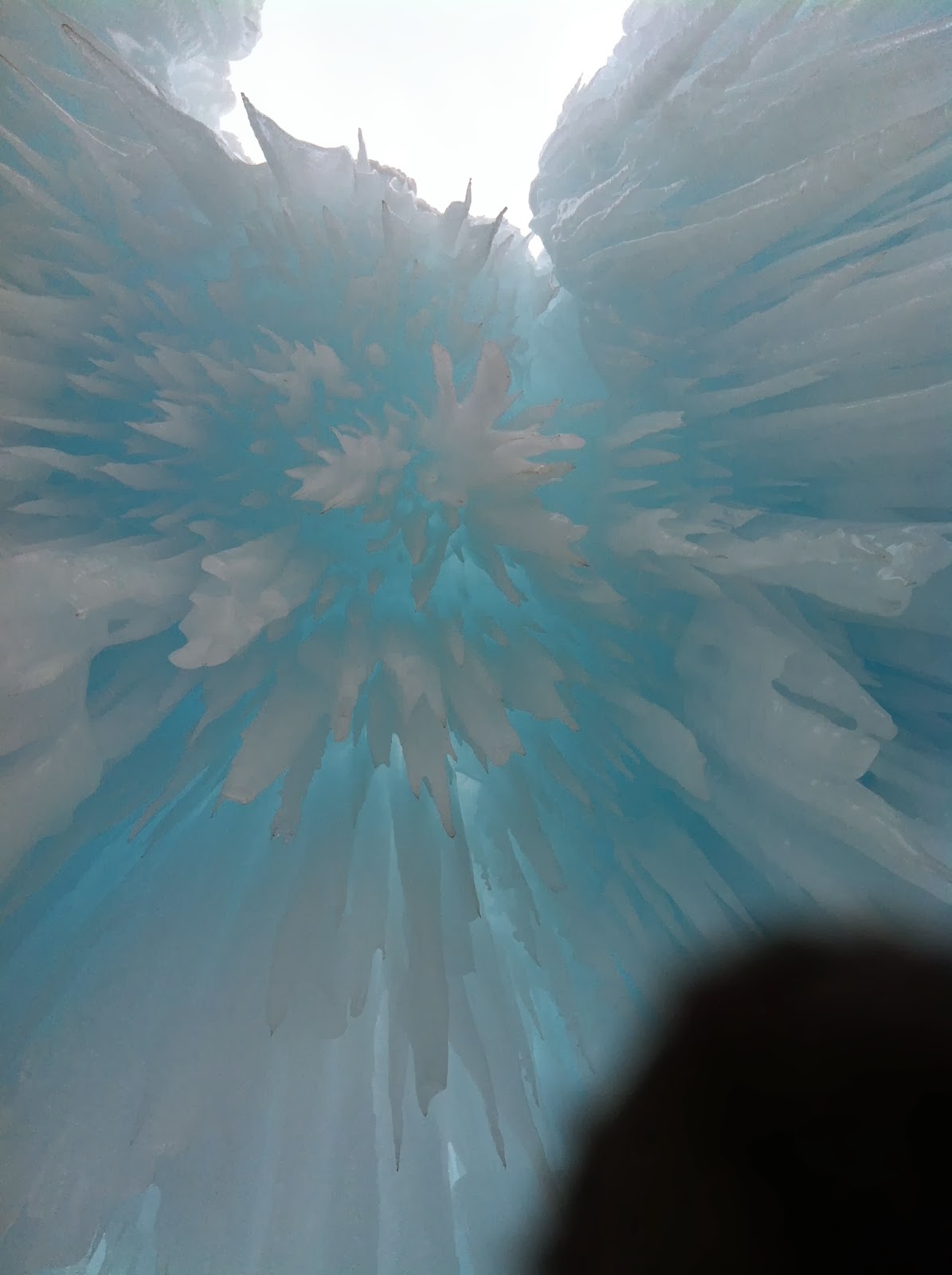 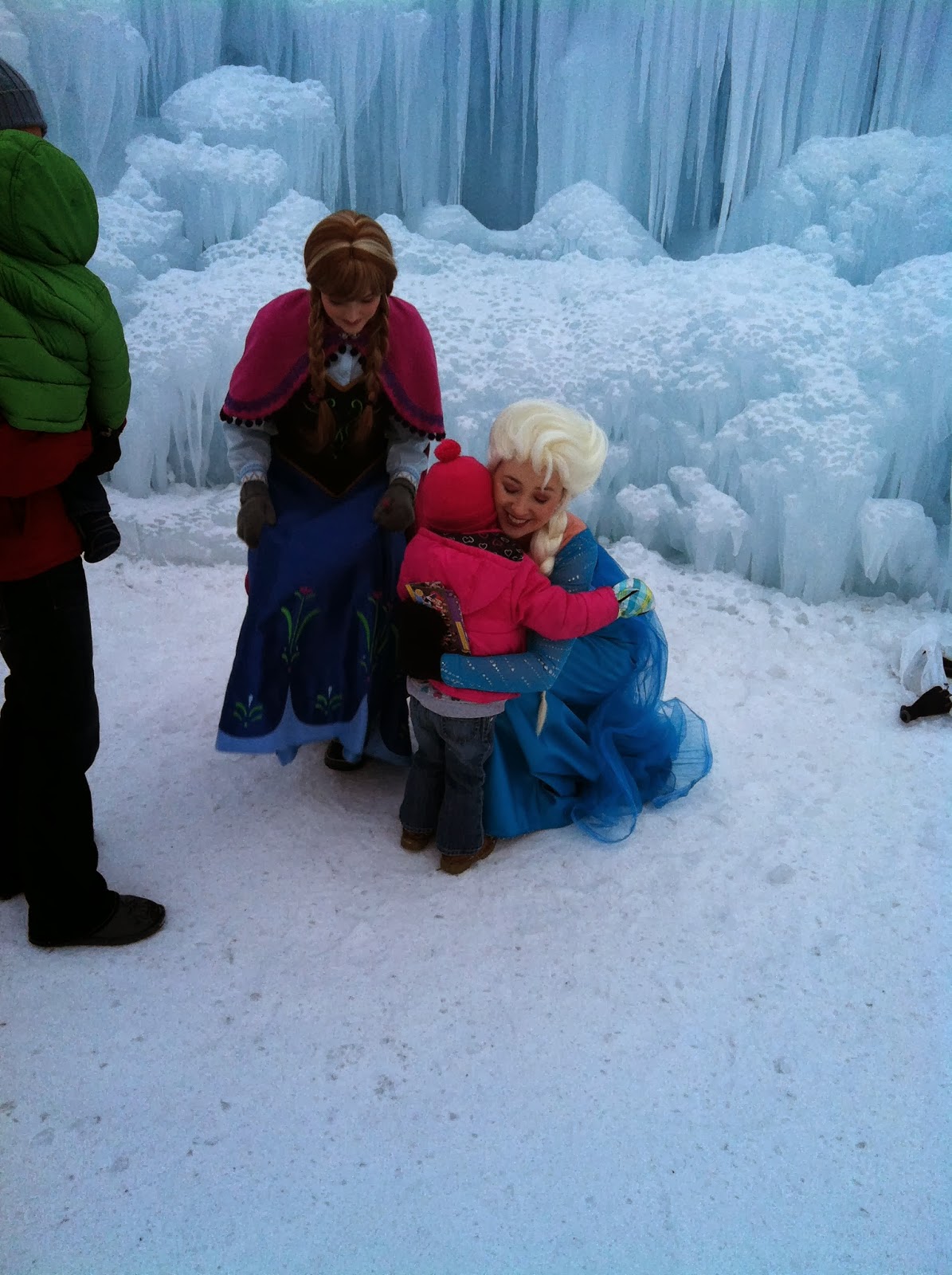 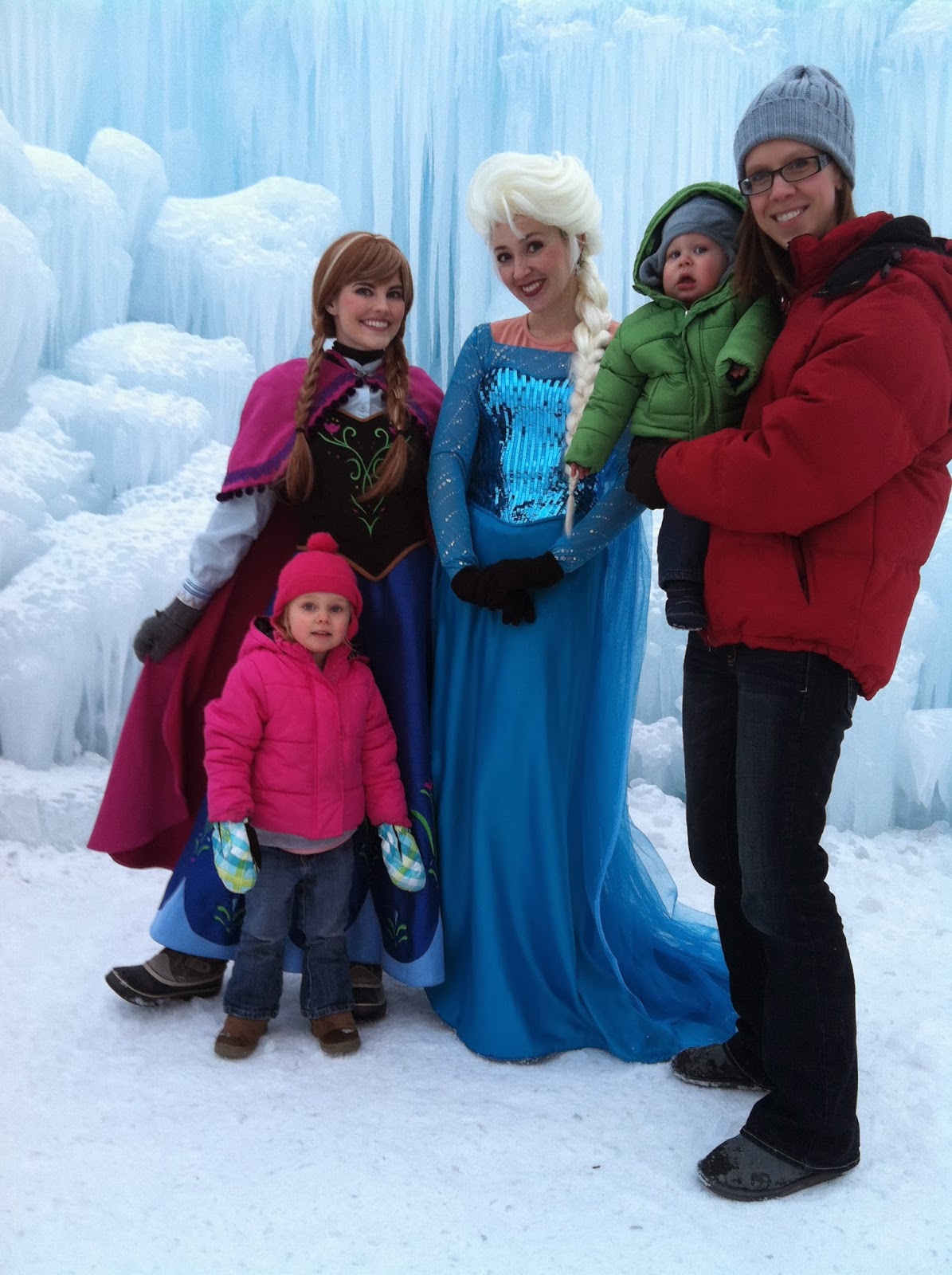 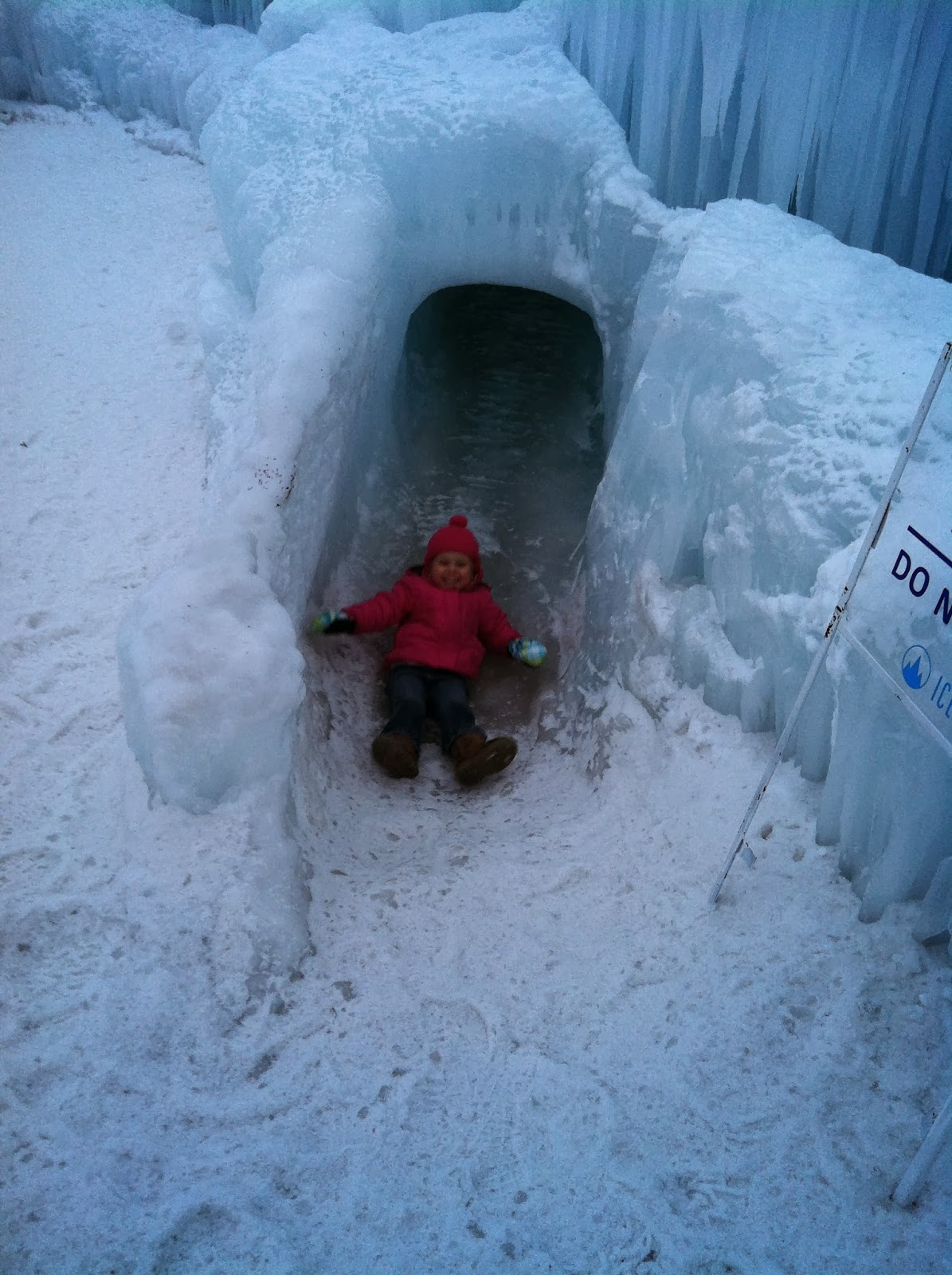 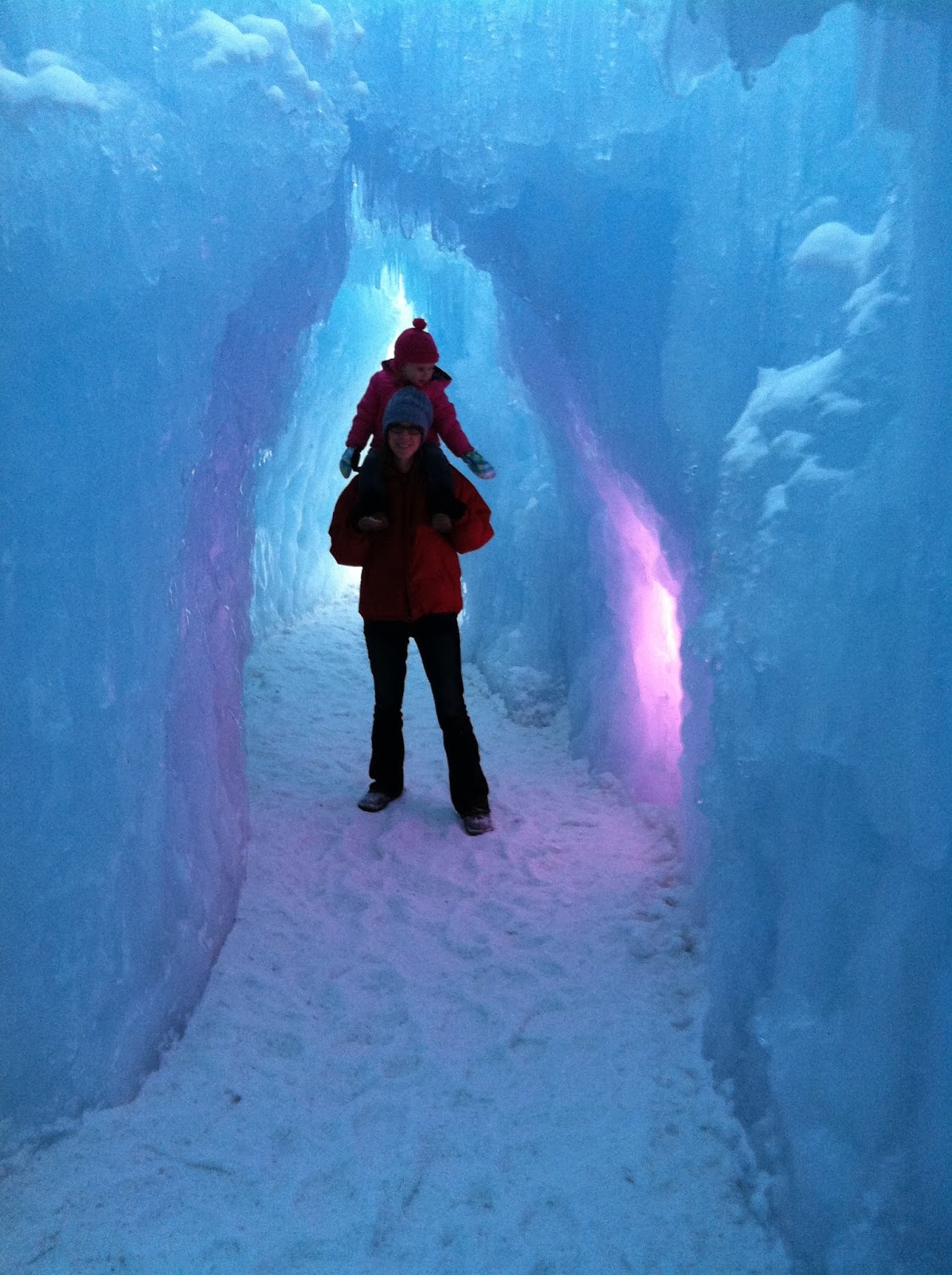 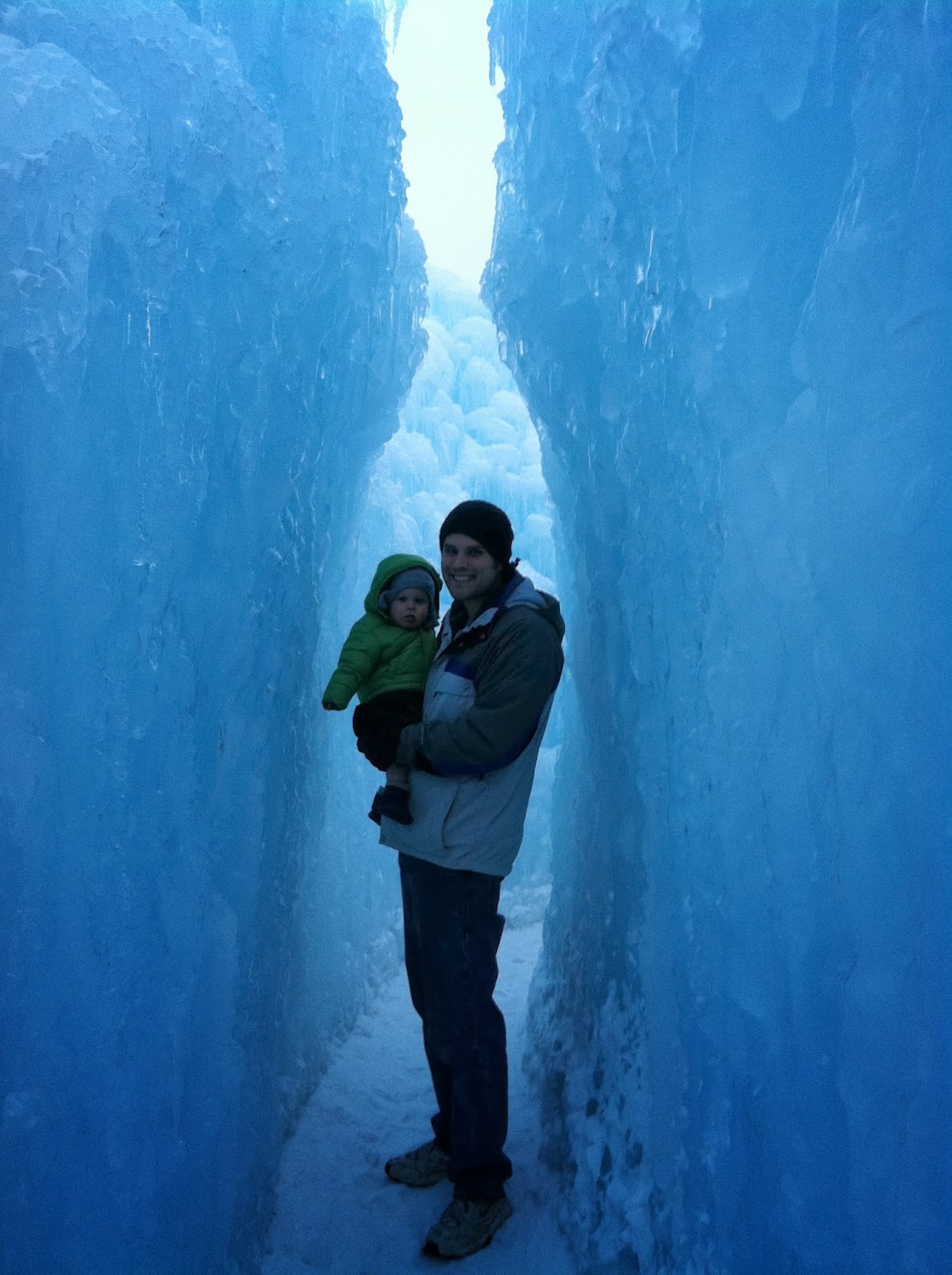 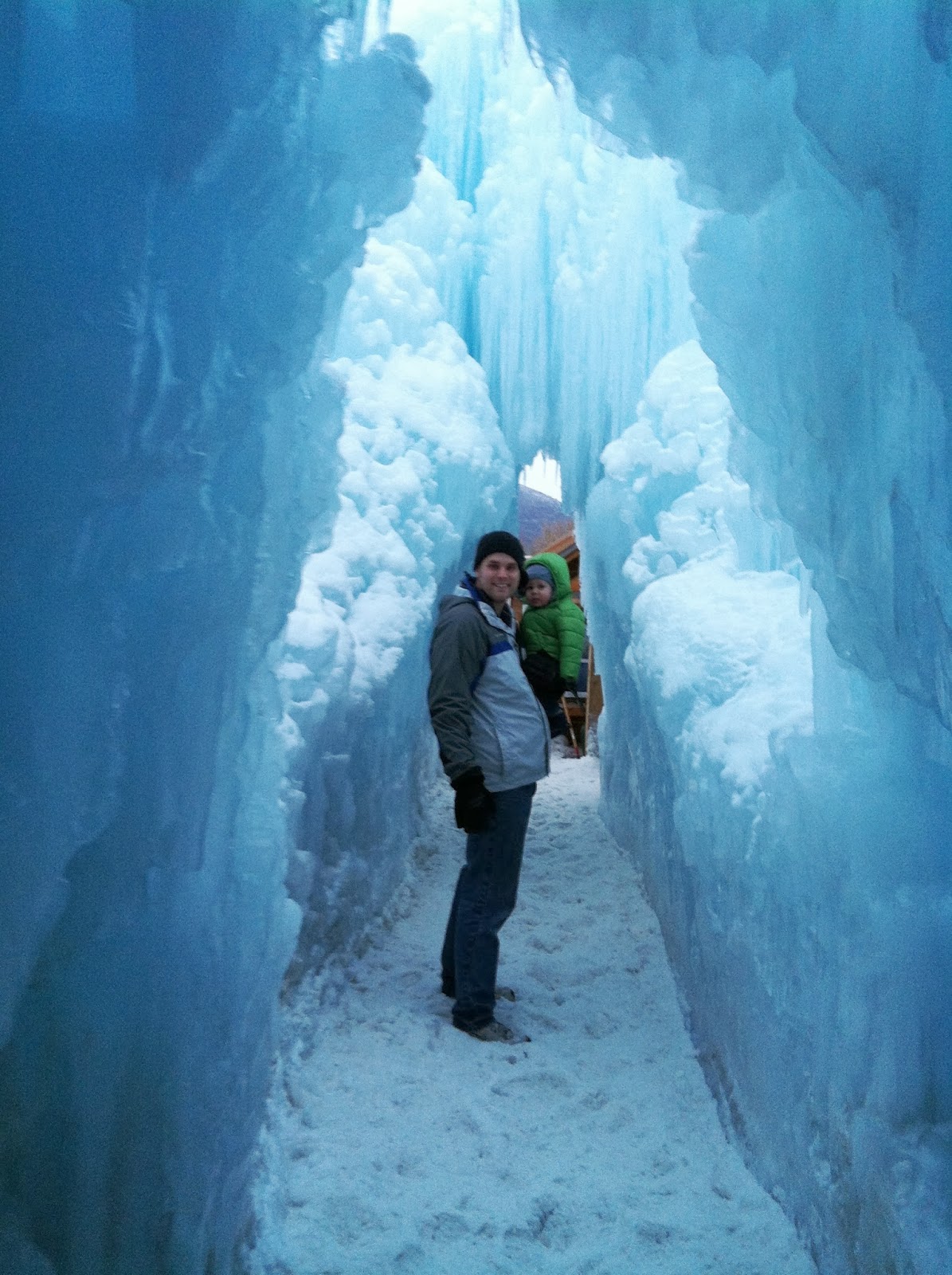 I've had to work longer hours over the past few weeks because we lost our HR Director in early February and I've had to fill in a lot.  I've missed the daily interactions with employees and it's nice to do some of that work again, but it's hard to have had so much to suddenly catch up on and be away from home more.  It's getting better now, but we also have our huge annual convention coming up in April that will require a lot of my time.  The kids were not fans of the change and both were blubbering messes for a few days when I would come home.  But they both run to me as soon as I come in the door.  I miss them so much while I'm gone and I love that they're so excited to see me!

Tyler has been signing more over the last few weeks.  He will sometimes fold his arms by himself for prayer, say more, please, and thank you in addition to all done.  He also says "hi" now and I love his cute little baby voice.  His big news is that he also started walking just after his birthday!  Not only is he walking, but he's apparently going to be a doctor so we should be well taken care of.


Here's another Tyler video.  I didn't really catch it, but Kyle was doing his Donald Duck voice and Tyler thought it was awesome so started imitating him!


Kyle said that Tyler loves to do yoga with him because he thinks it's a game.  When Kyle does any poses where there's an angle and he's not flat on the ground, Tyler thinks it's hilarious to crawl back and forth under him.  Tyler has also really taken an interest in coloring lately.  He surprised me by taking a crayon from Alexa and coloring on a piece of paper -- just like that while on my lap!  He continues to blow me a way by the stuff he just figures out on his own.  I swear we sat and practiced all of this stuff with Alexa -- stairs, coloring, feeding herself with a spoon, etc.  He just kind of picks things up and randomly does them really well all of the sudden.

We had a traumatic instance a couple weeks ago when Tyler locked himself in the bathroom!  I was playing upstairs with Alexa and Tyler and he walked out of their room into the bathroom.  I stood up to follow him and he opened the vanity drawer right then, which just so happens to be right in front of the door.  I started begging him to close it, but by then he was pulling down bath toys to babble to.  I stood there talking to him for what seemed like forever, slowly getting more panicked.  Alexa sensed my panic and started crying and saying "I need my Tyler!"  I couldn't take the door off the hinges because they are on the inside of the door, so finally I took out the door handle, stuck a crow bar through the hole, and wiggled it until I got the drawer to close.  I don't recommend it and I'm tempted to glue that vanity drawer shut.

I was changing his diaper on my lap while in the car (parked) this week and he saw himself in the windshield and immediately started waving and smiling.  He smiled, waved and giggled the whole time I was changing him.  He's so happy all the time and I love it! 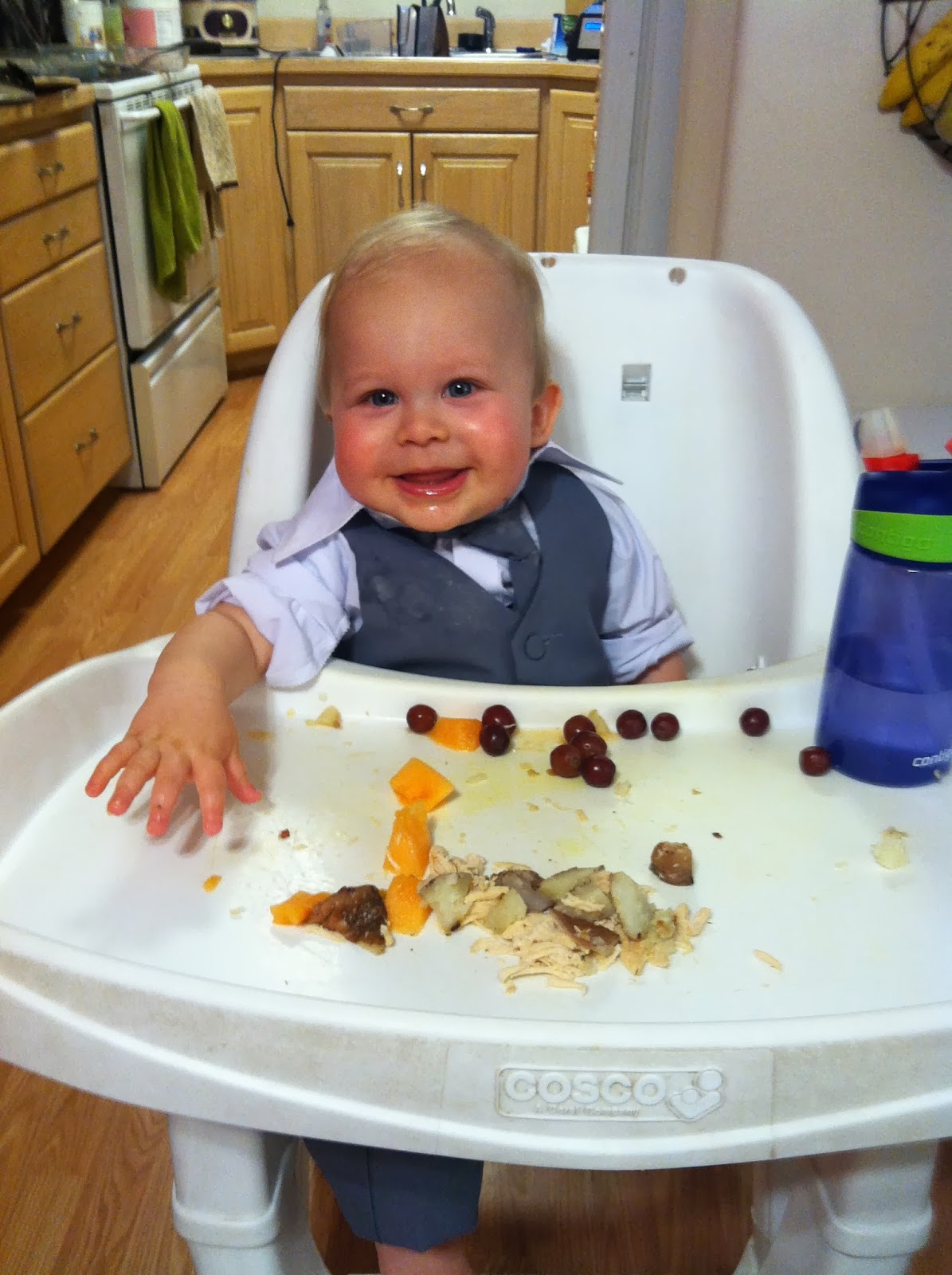 I have to brag about Kyle for a moment.  He came home from work on the 13th (the night before Valentine's Day) at almost 1am, and then proceeded to make homemade scones and glaze for us to have for breakfast.  We didn't have a heart-shaped cookie cutter, so he made one.  At 1am.  He stayed up until at least 2 and then woke up at 6am for work.  He also made a huge, so so good dinner, sent me chocolate dipped strawberries at work, and other amazingness.  The kids loved the scones and I was so impressed that he made the cookie cutter himself.  Who knew that being a handy man could translate to heart-shaped cookie cutters.  He's a keeper. 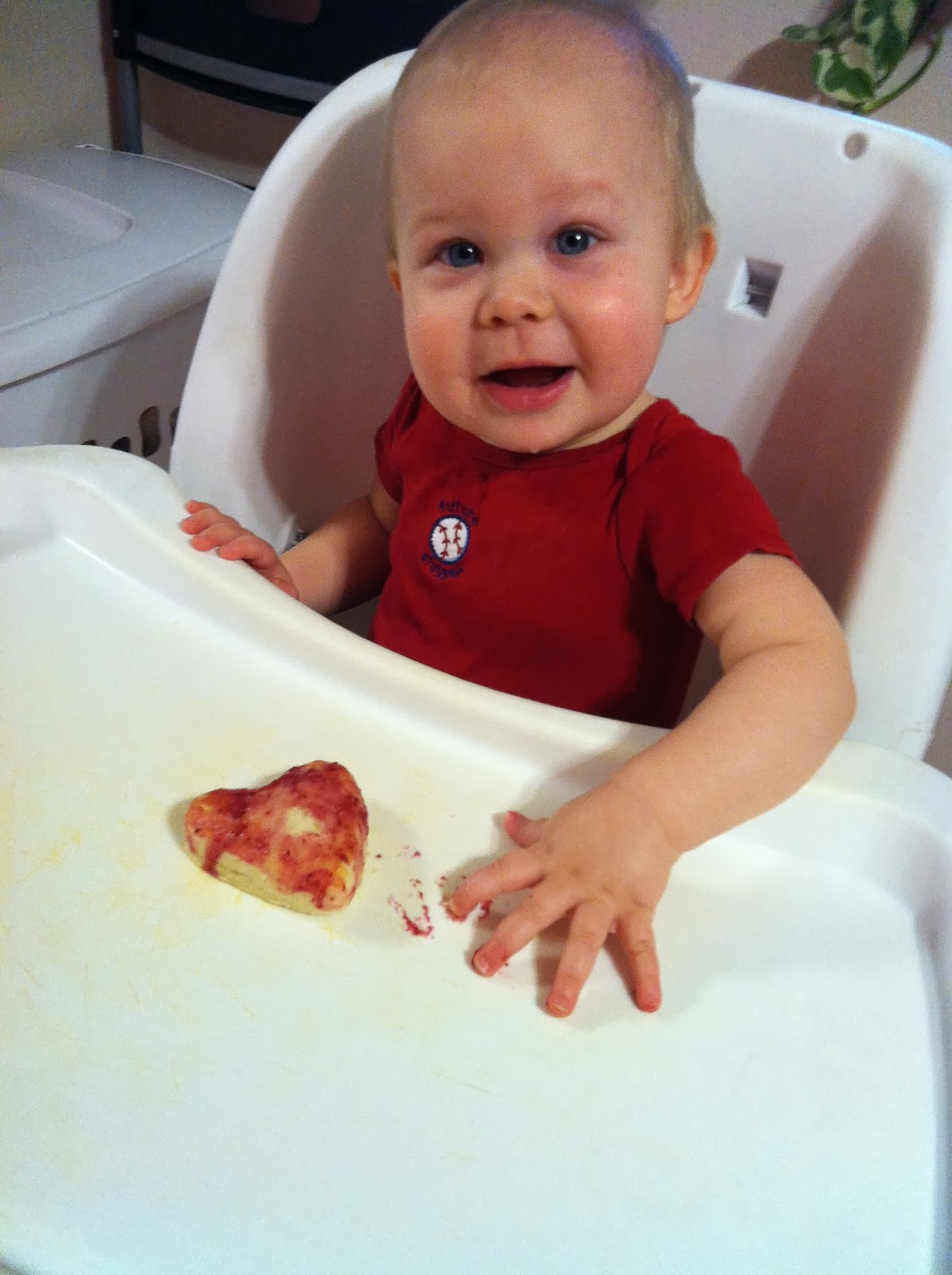 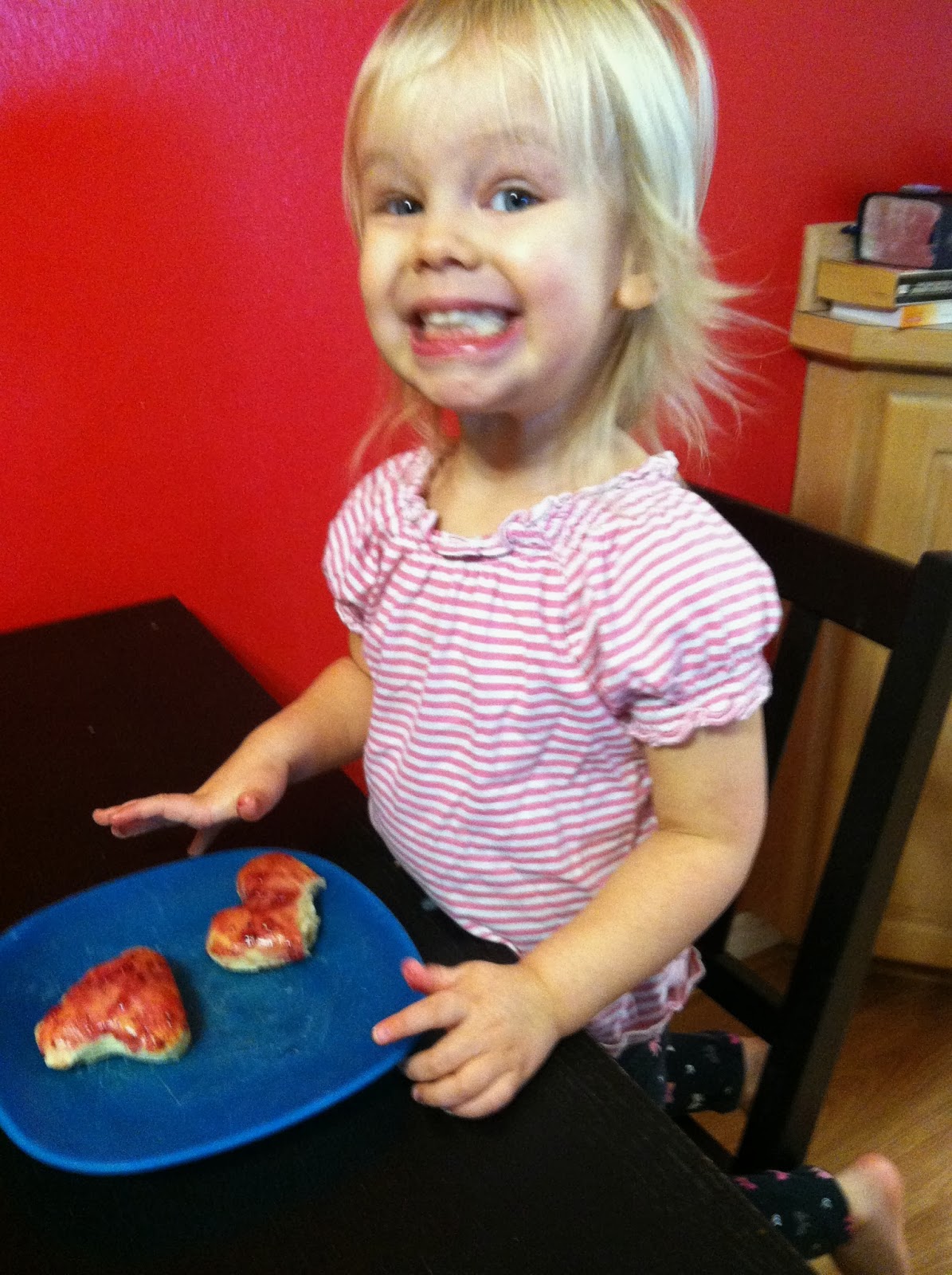 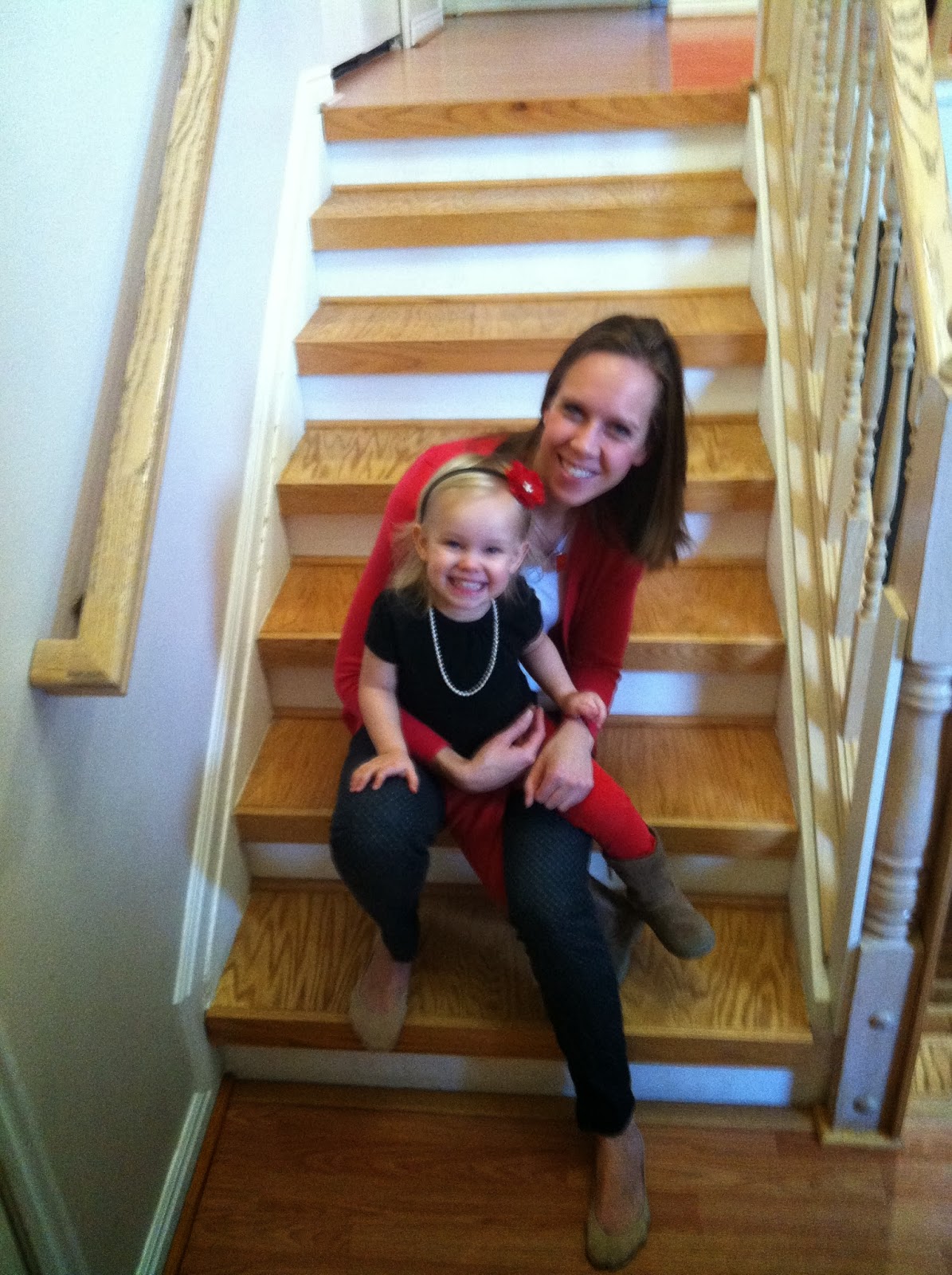 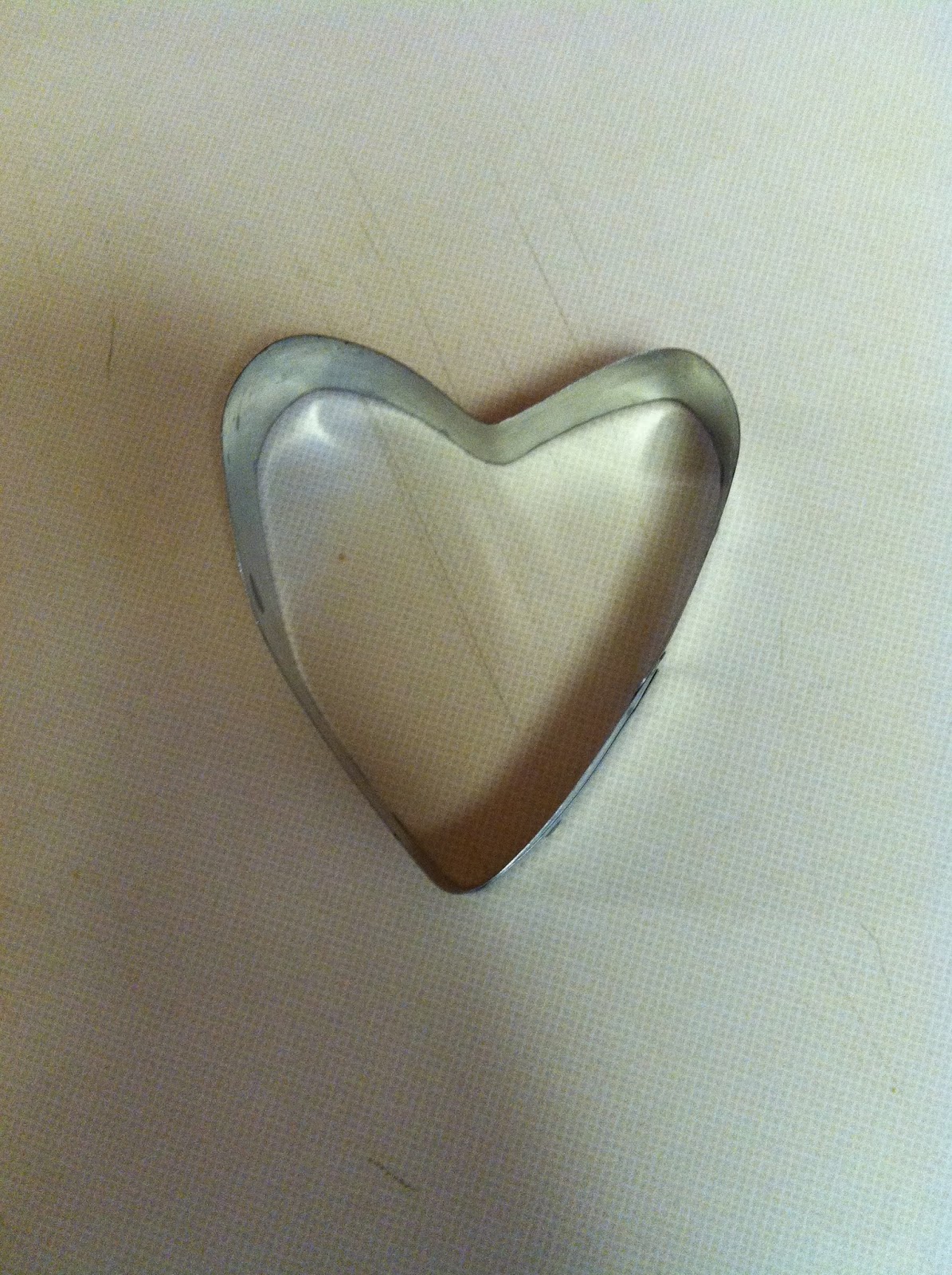 We had a blast celebrating Tyler's birthday by starting the day with donuts and a hot air balloon ride, then birthday naps, macaroni and cheese, and his other favorite activities -- the bubble machine, a bath with lots of toys, etc.  We sang happy birthday to Tyler several times throughout the day (per Alexa's request) and Tyler would clap and smile for us every time :). 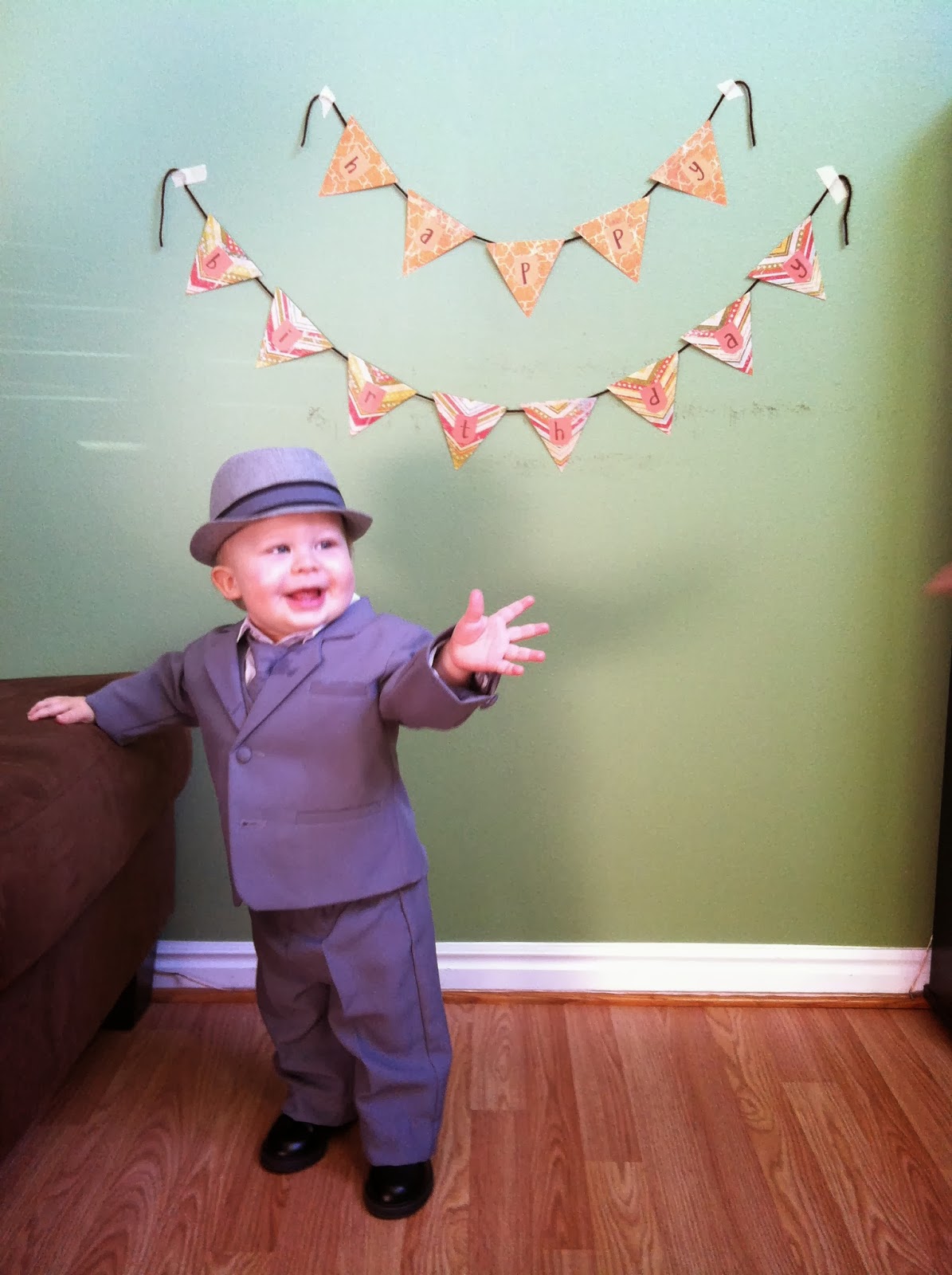 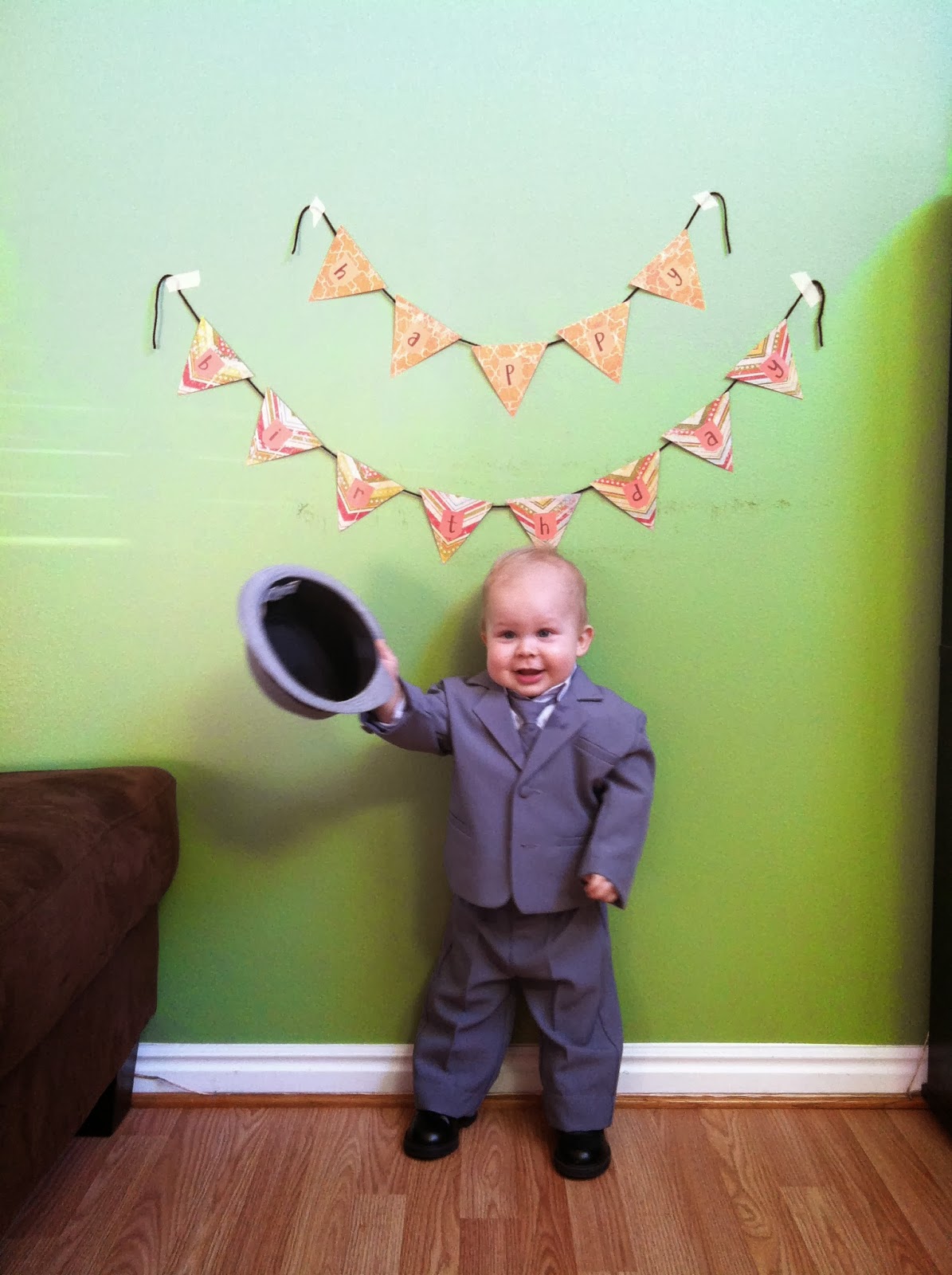 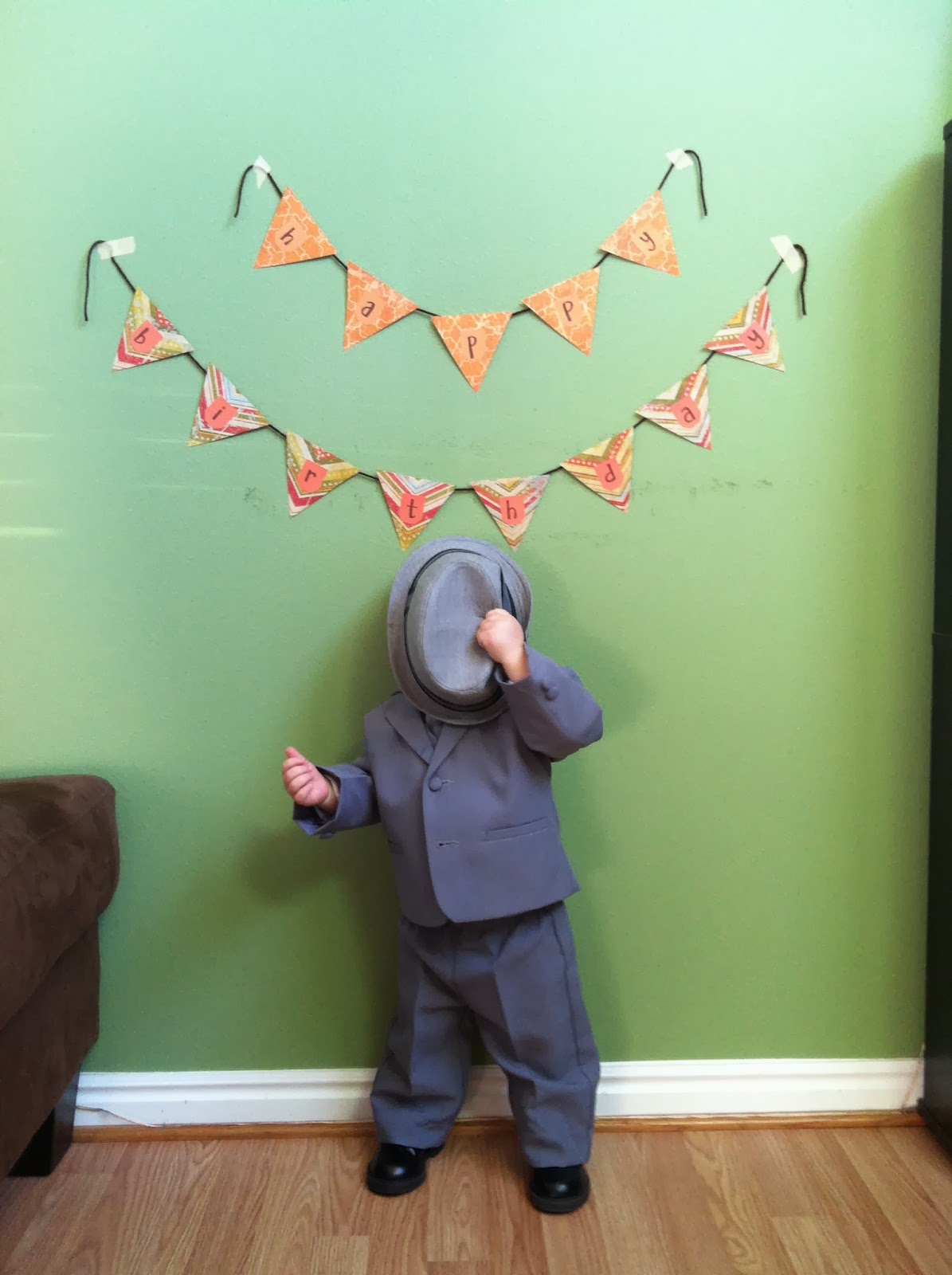 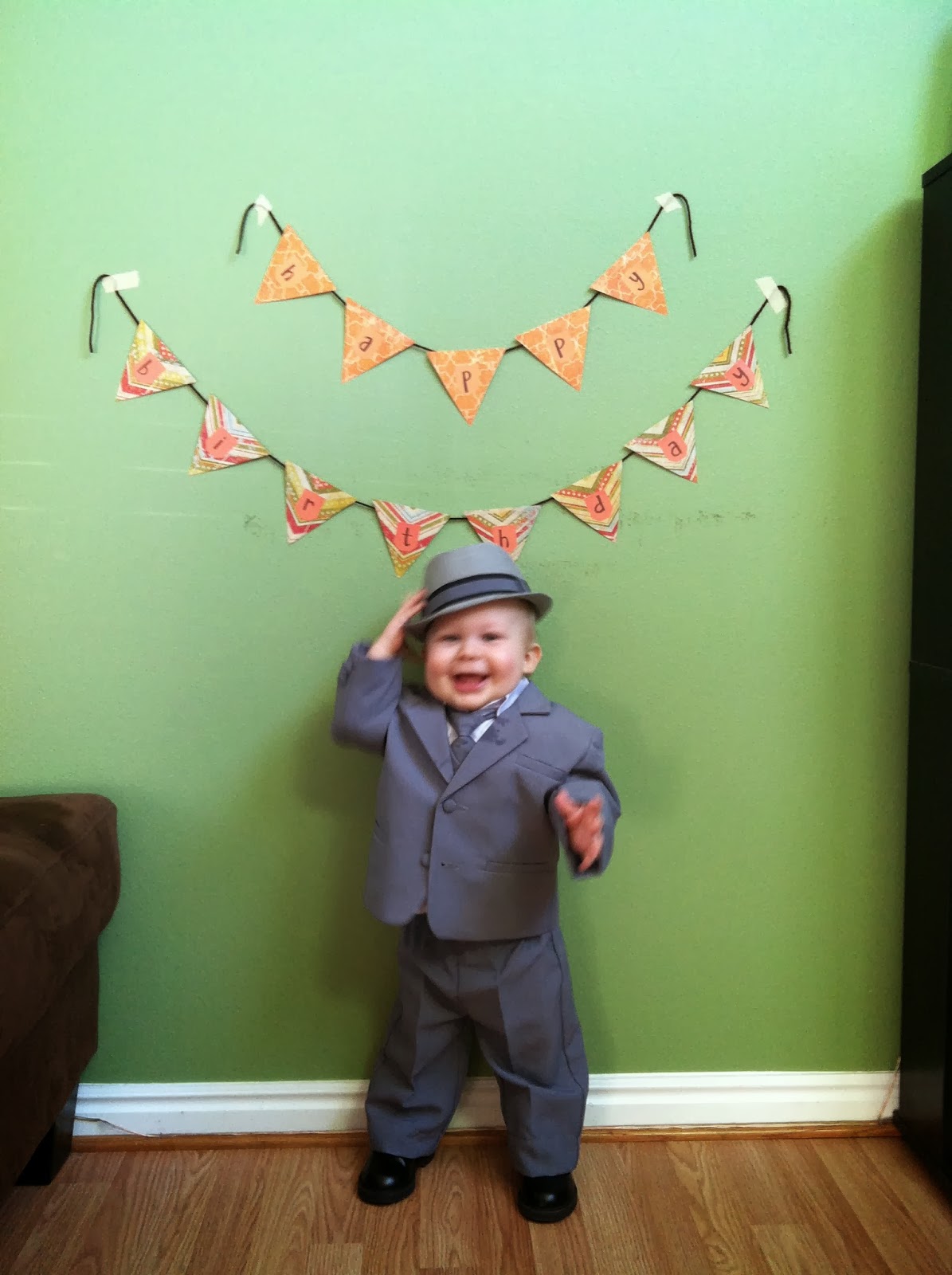 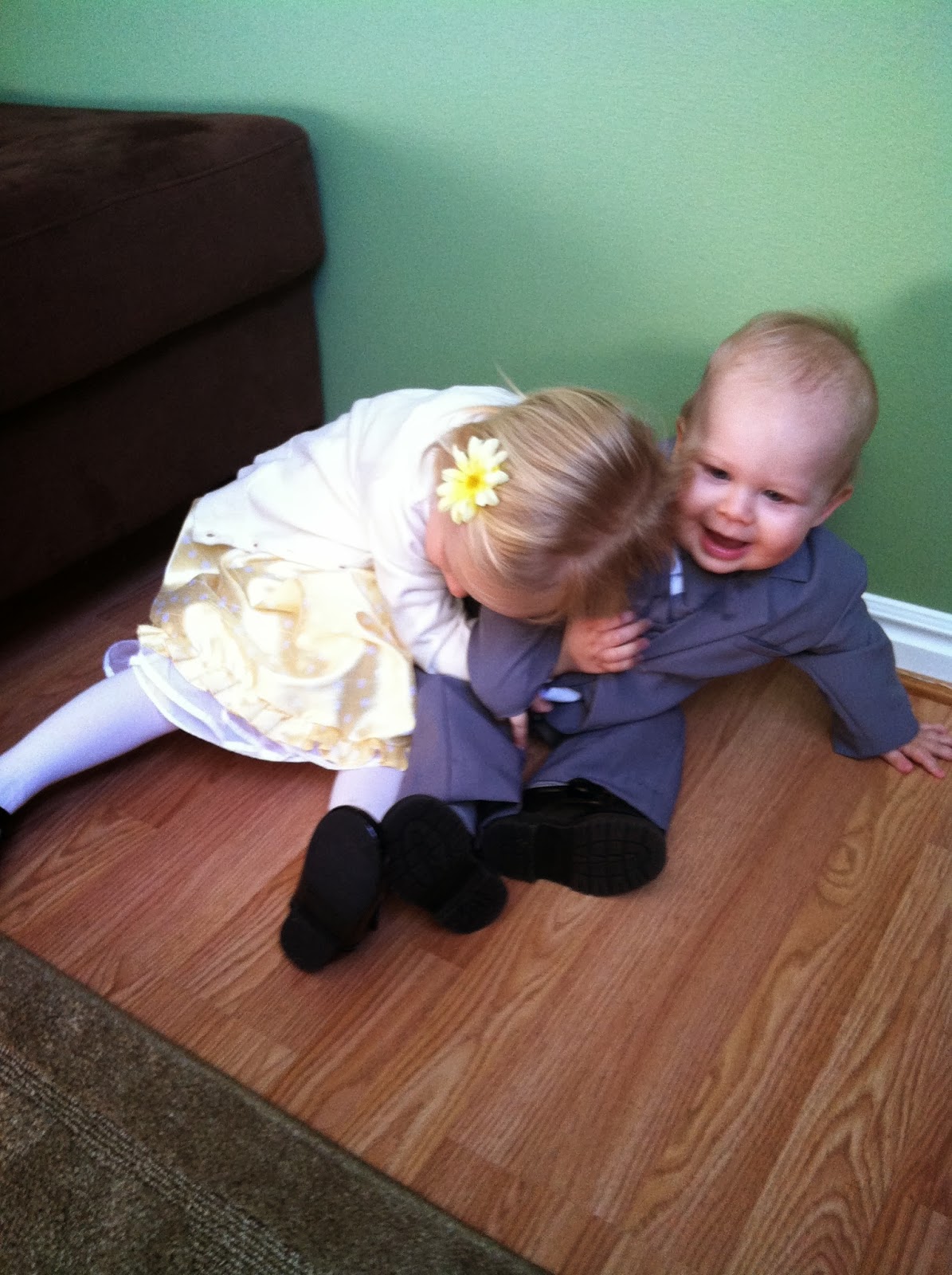 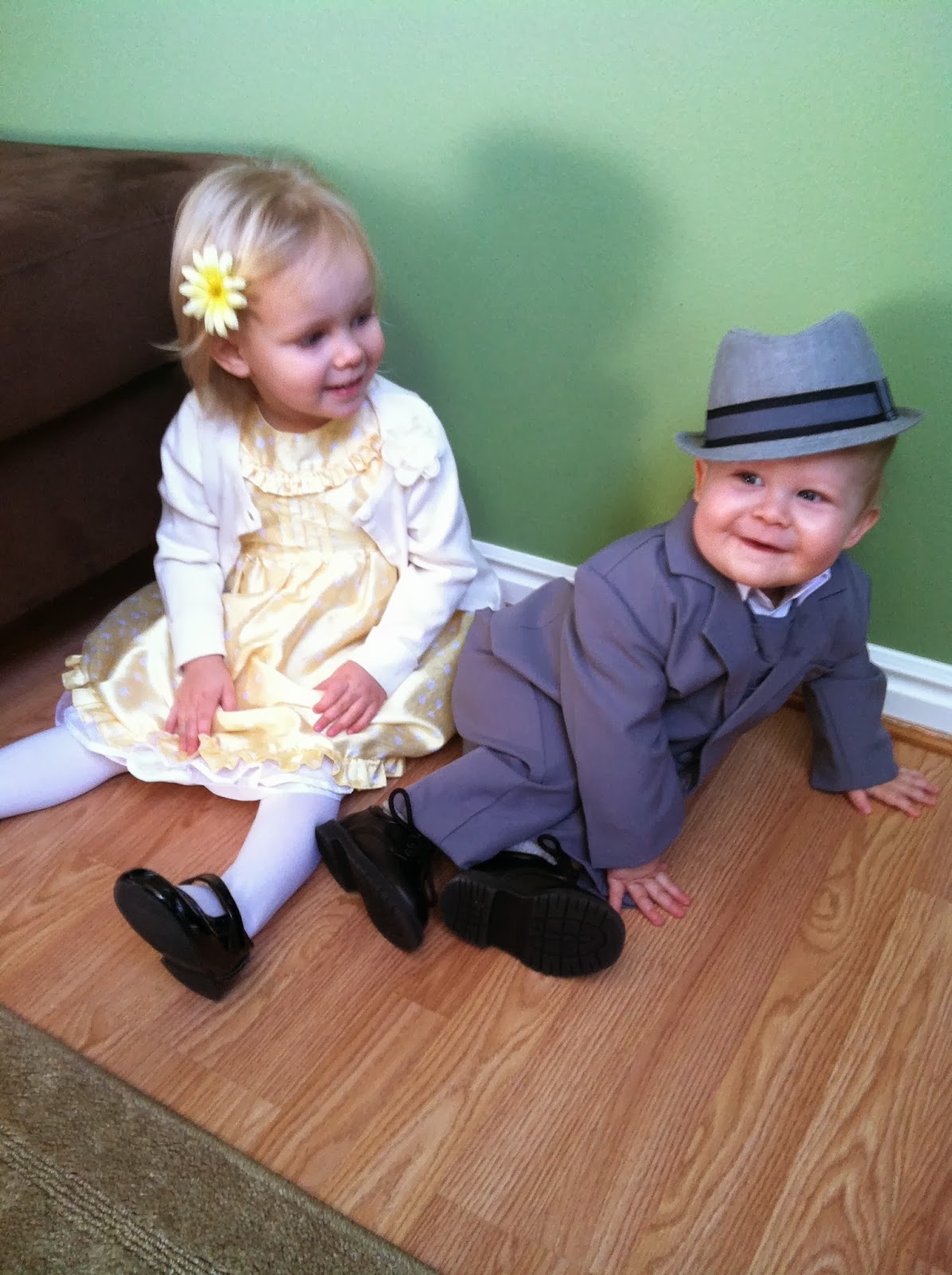 Tyler's family birthday party on the 2nd was on Super Bowl Sunday, so we had a joint party to celebrate football and Mr. Bambino here.  Todd, Melissa, Casey, and Jess came to celebrate with us. 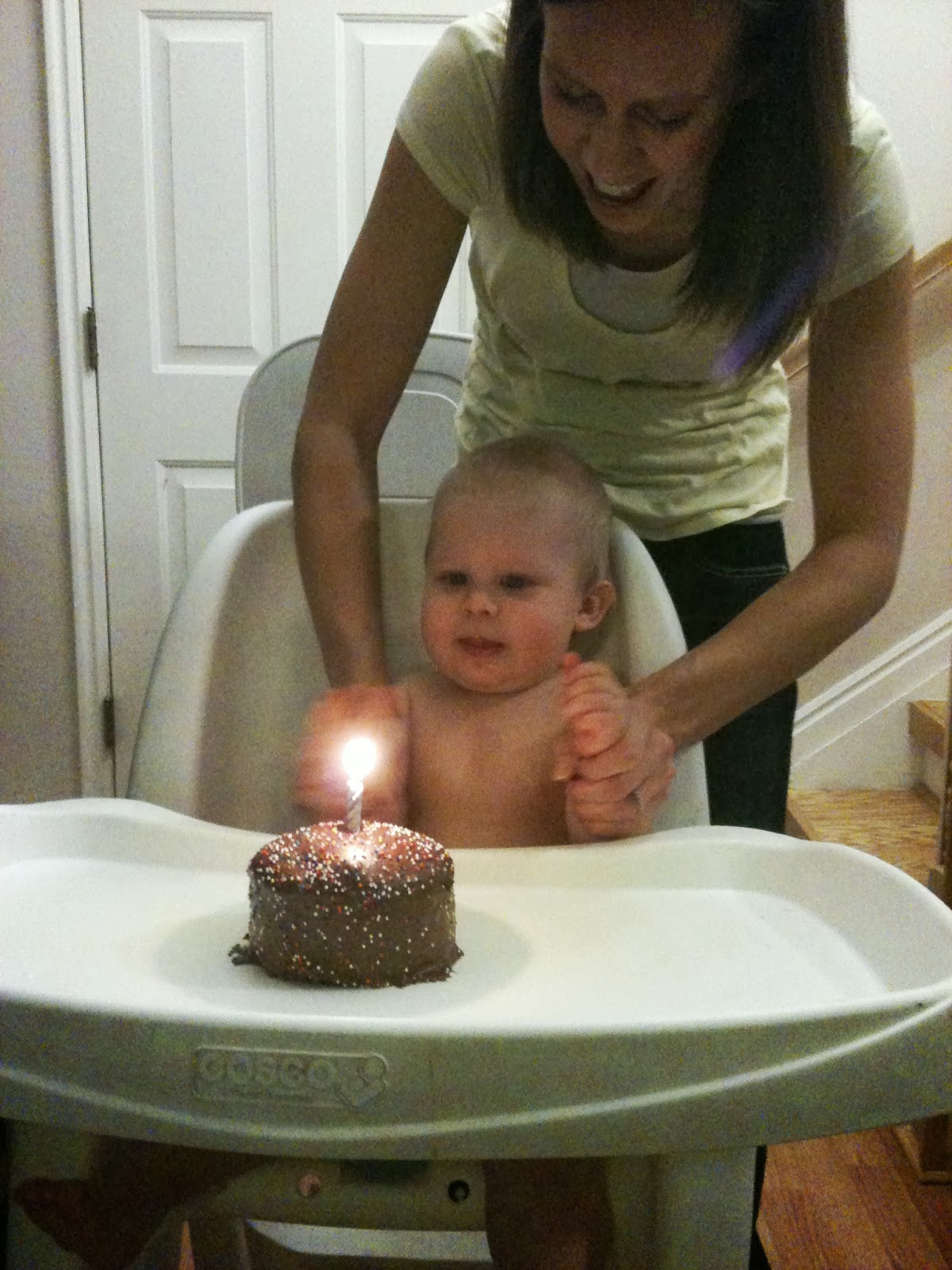 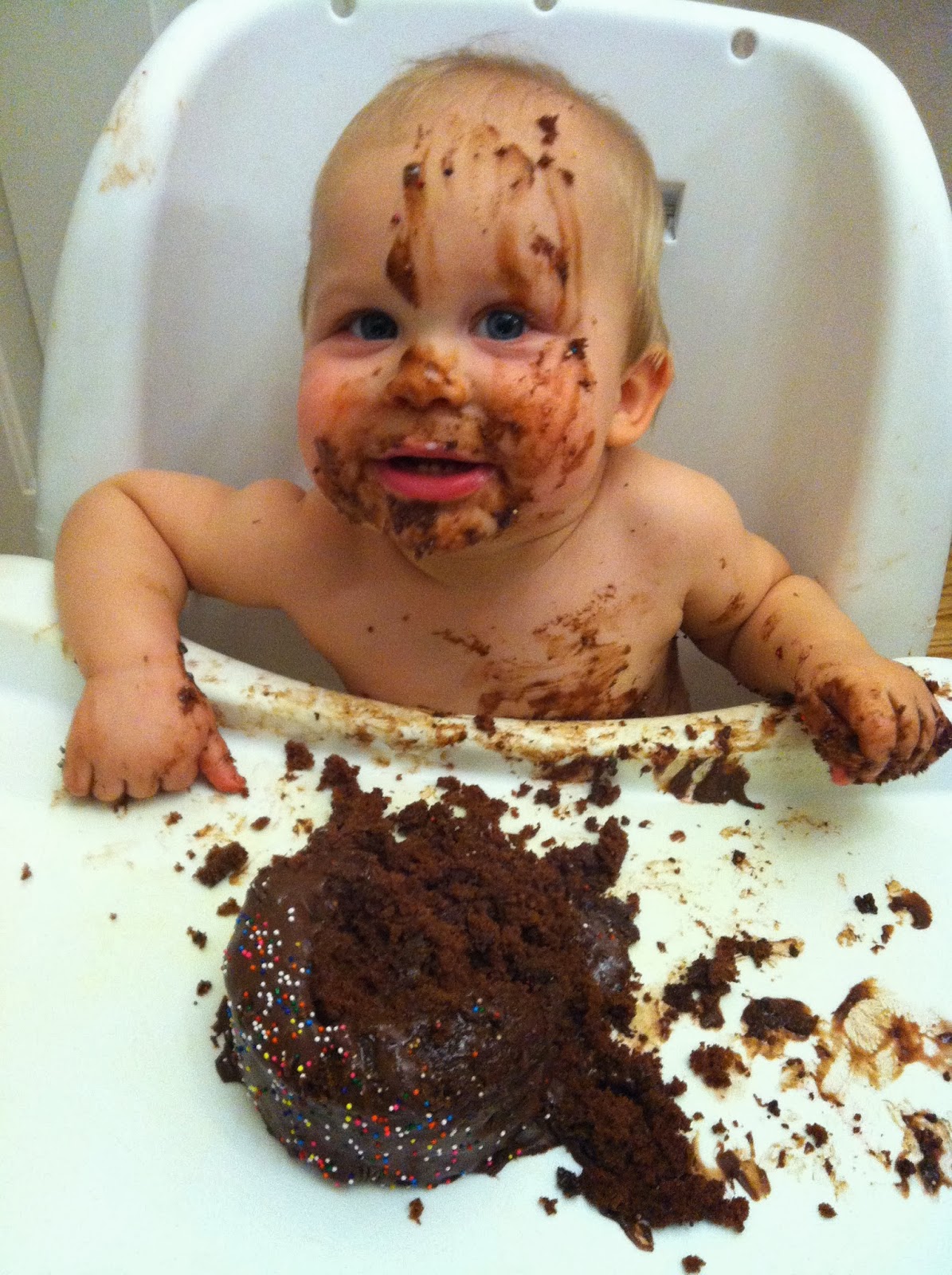 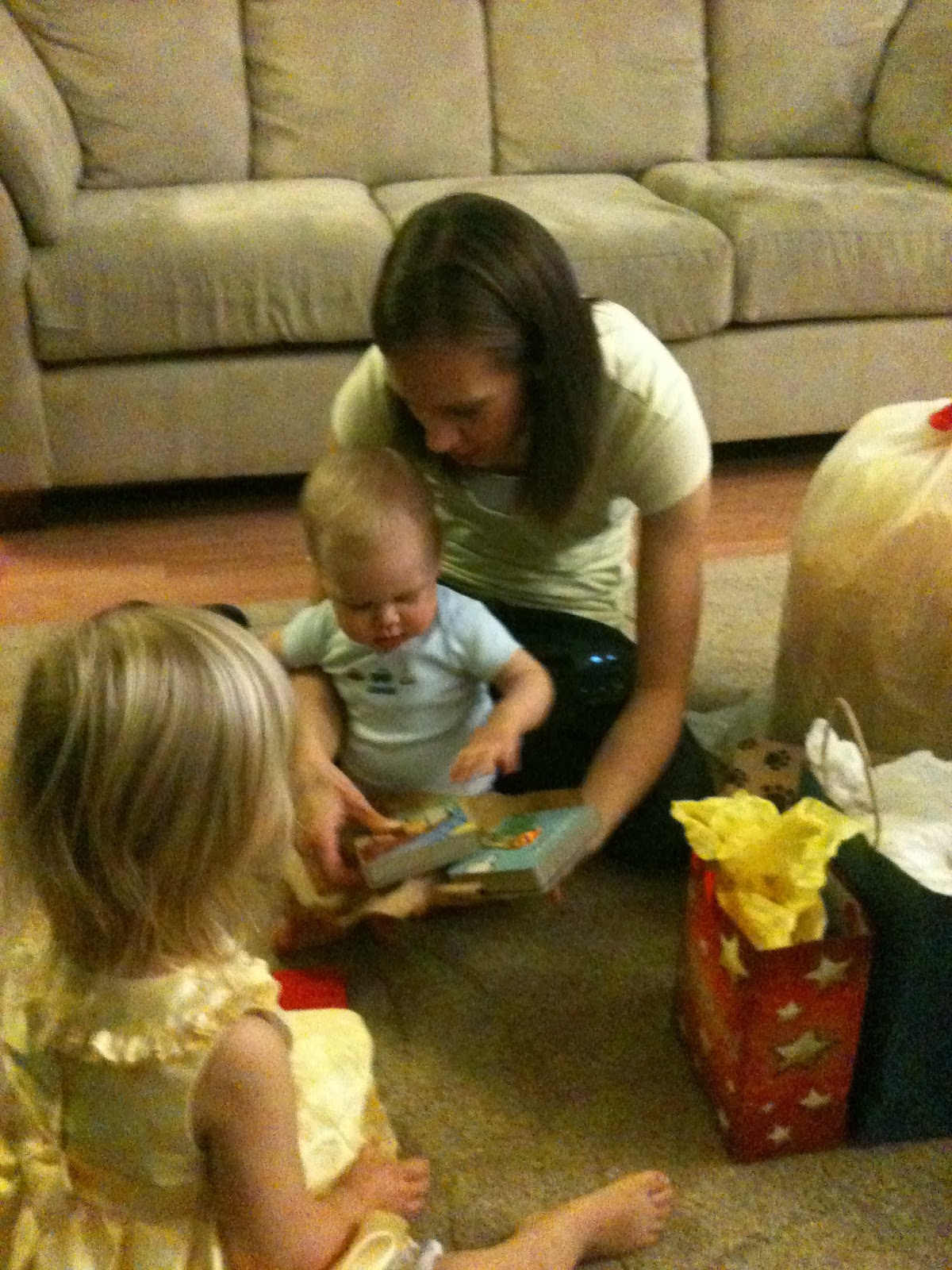 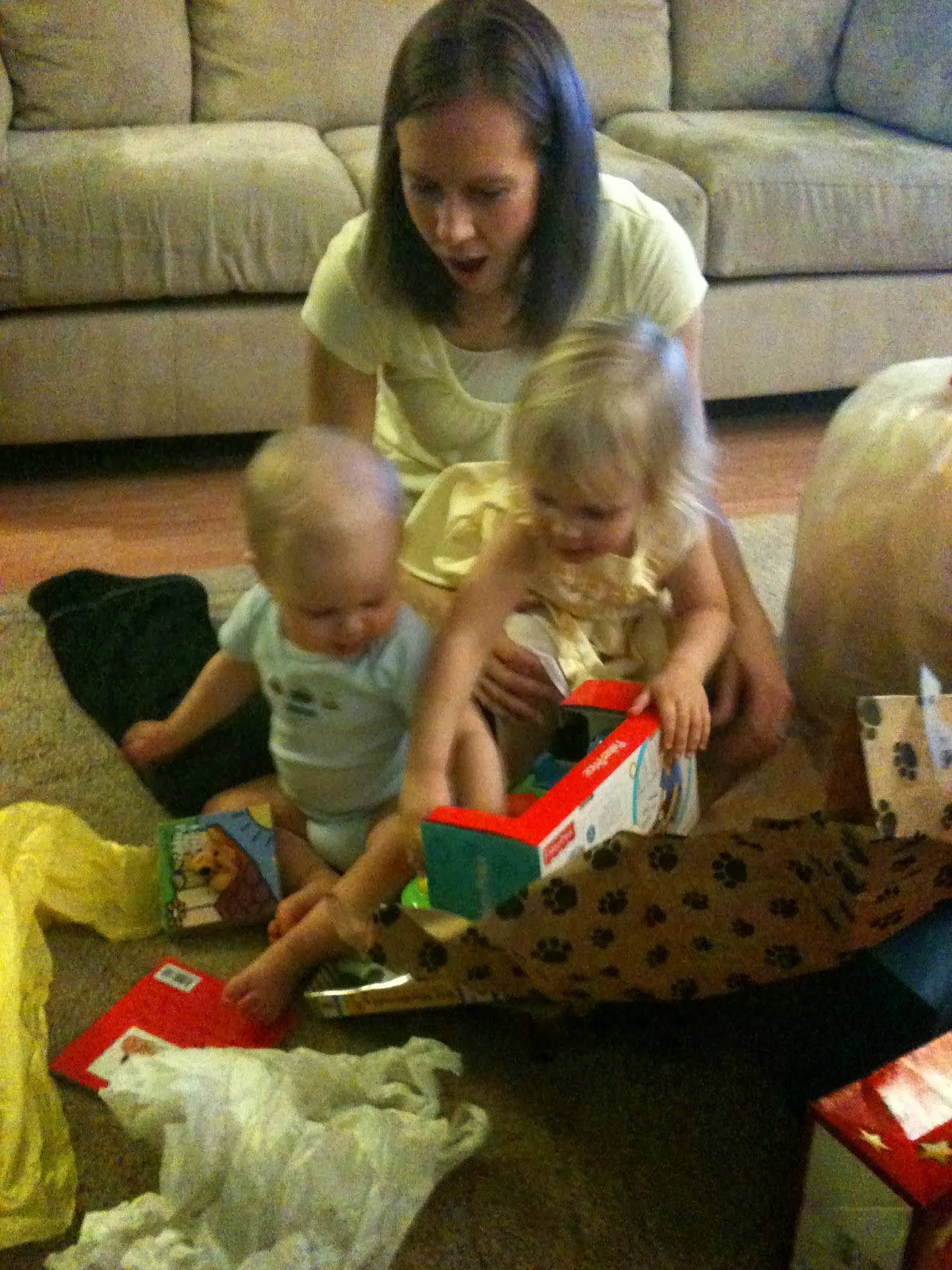 Reading our Happy Birthday book (a tradition) from Marmie and Grandpa: 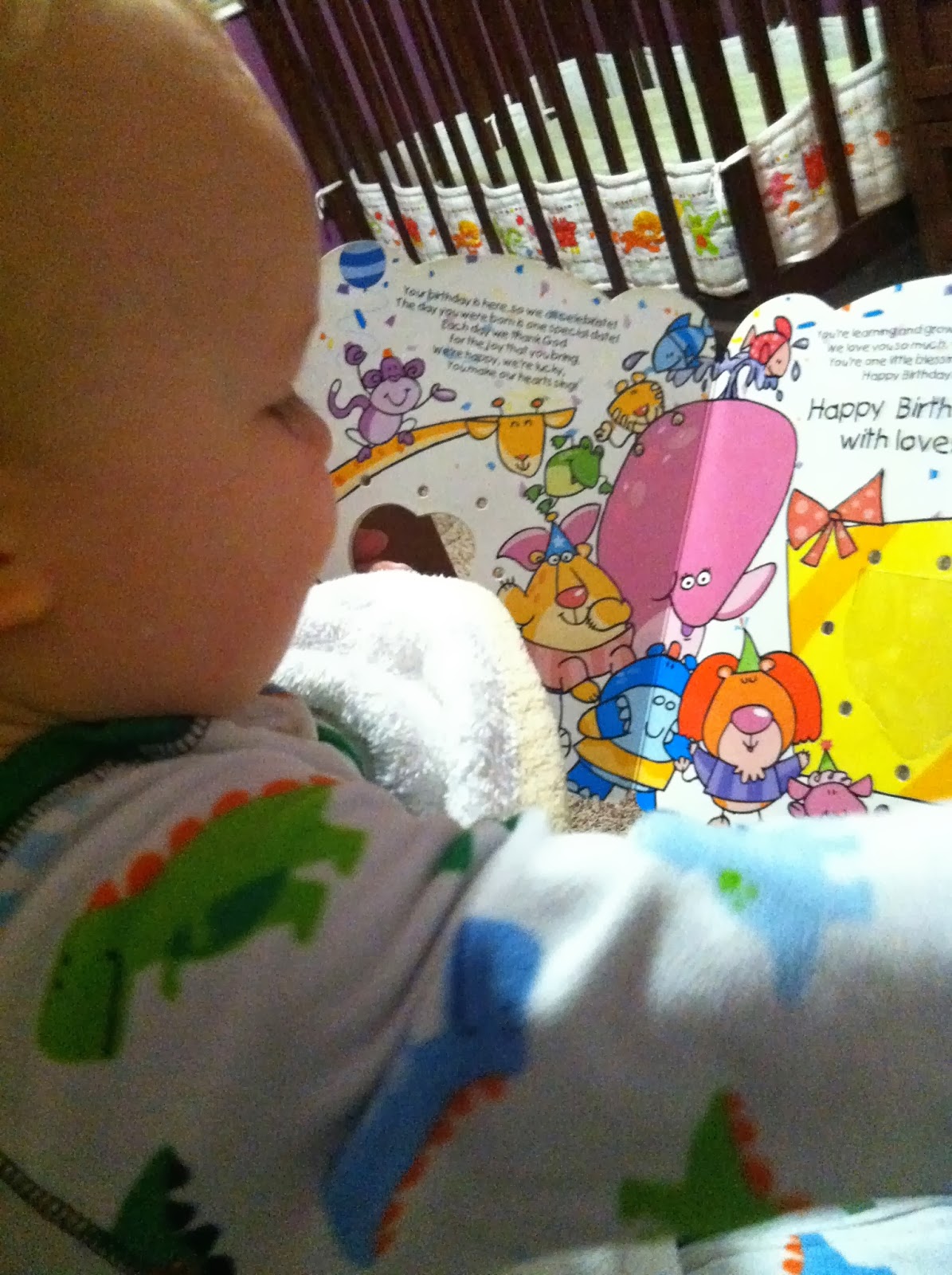 Kyle and I also listened to the 911 recording before we went to bed, which I think we'll make another tradition.  What a sweet, crazy experience to relive.  Our adorable, happy boy has brought us so much joy over the last year!  He loves being tickled, wrestling with Alexa, sucking his thumb and holding his blankie, jumping onto the bean bag chairs (or being thrown usually), and playing outside.  He's almost always happy and we love his toothy, slobbery smile so much!!  He has started racing up to me when I get home from work every day and I just can't get enough of his excitement to see me and his sweet hugs.  We love you, Tyler!  Happy Birthday!
Posted by Swingle Family at 9:44 PM 0 comments