I'm kind of doing this blog partly as a way to keep in touch with family and friends and let them know what we're up to these days, as well as keeping a journal of sorts so I have something to look back to and remember this blur.  So, to keep along with the journal side of things, I wanted to post a quick note that I can look back to as a reference to a time when I felt prompted and amazed by the Lord's planning and timing in our lives.  I remember sitting through General Conference and thinking how strange it was (and sad) that so many people talked about losing small children and how they coped or applied the principles of the Atonement in their lives and gained stronger testimonies of the Plan of Salvation.  Now, as I look at the tragic events of the school shooting this week in Connecticut, I'm truly awestruck at the inspired messages from General Conference that came prior and discussed these very topics and how the Lord can help our families through what seem to be such unbearable times.  Here's what I just posted on Facebook after reading some of the Conference Ensign tonight with Kyle:

Wow, just read this talk with Kyle and I remembered how there were like 4 talks in the last General Conference session that talked about losing children. It's really amazing to see the inspiration ahead of time with respect to the loss of

so many little ones this week in Connecticut. For my non-Mormon friends, General Conference is a church meeting that the Church of Jesus Christ of Latter-day Saints has twice a year where a living prophet and other Church leaders speak to members around the world. I included the parts that really stuck out to me below from Elder Shane Bowen's talk this past October where he is talking about how hard it was to lose his little son at such a young age.
http://www.lds.org/general-conference/2012/10/because-i-live-ye-shall-live-also?lang=eng&query=m+%28name%3A%22Shayne+M.+Bowen%22%29

At that moment it felt as if our world had come to an end. It is impossible to describe the mixture of feelings that I had at that point in my life. Most of the time I felt as if I were in a bad dream and that I would soon wake up and this terrible nightmare would be over. For many nights I didn’t sleep. I often wandered in the night from one room to the other, making sure that our other children were all safe. Feelings of guilt racked my soul. I was his father; I should have done more to protect him. If only I would have done this or that. Sometimes even today, 22 years later, those feelings begin to creep into my heart. I soon began to feel anger. “This isn’t fair! How could God do this to me? Why me? What did I do to deserve this?” I even felt myself get angry with people who were just trying to comfort us. I remember friends saying, “I know how you feel.” I would think to myself, “You have no idea how I feel. Just leave me alone.” As I felt the guilt, anger, and self-pity trying to consume me, I prayed that my heart could change. Through very personal sacred experiences, the Lord gave me a new heart, and even though it was still lonely and painful, my whole outlook changed.

My life started to change, and I was able to look forward with hope, rather than look backward with despair. I testify that this life is not the end. The spirit world is real. The teachings of the prophets regarding life after death are true. This life is but a transitory step forward on our journey back to our Heavenly Father. The same feelings of loyalty, love, and family unity don’t end as our loved ones pass to the other side; instead, those feelings are intensified.

Sometimes people will ask, “How long did it take you to get over it?” The truth is, you will never completely get over it until you are together once again with your departed loved ones. I will never have a fulness of joy until we are reunited. But in the meantime, as the Savior taught, we can continue with good cheer. I have learned that the bitter, almost unbearable pain can become sweet as you turn to your Father in Heaven and plead for His comfort that comes through His plan; His Son, Jesus Christ; and His Comforter, who is the Holy Ghost. What a glorious blessing this is in our lives. Wouldn’t it be tragic if we didn’t feel great sorrow when we lose a child? How grateful I am to my Father in Heaven that He allows us to love deeply and love eternally. How grateful I am for eternal families. How grateful I am that He has revealed once again through His living prophets the glorious plan of redemption.

Remember as you attended the funeral of your loved one the feelings in your heart as you drove away from the cemetery and looked back to see that solitary casket—wondering if your heart would break. I testify that because of Him, even our Savior, Jesus Christ, those feelings of sorrow, loneliness, and despair will one day be swallowed up in a fulness of joy. I testify that we can depend on Him and when He said: “I will not leave you comfortless: I will come to you… because I live, ye shall live also” (John 14:18–19).
Posted by Swingle Family at 9:47 PM 0 comments

First of all, I am especially grateful for our sweet little girl and incredibly saddened by the loss to so many parents this week with the school shooting in Connecticut.  I don't even know what to say as far as how difficult that would be, even with the knowledge we have of eternal families and the plan that God has for us.  I also can't imagine the pain of those children who were there as witnesses to the tragedy of their friends and classmates at such a young age.  I love my family and can't imagine being without my cute, adorable Alexa who is running around the living room screaming "blankie!" at the moment and tickling Kyle.

I guess I haven't written since before Thanksgiving.  We had a double header with the Singletons and Grandma Sweeny.  We spent Wednesday night at the Singletons and had Thanksgiving lunch with them and the Skankeys, and then headed over to Snowbird for dinner with Grandma, Kathi & Don, Hope & Quinn, and Rich & Wendy.  Kyle said he never wants to do that again because he thought he was going to explode, haha.  Side note--Alexa woke up early Thanksgiving morning so we brought her into bed with us, and have discovered that she is a complete flailer.  I had Alexa kicking me from one side and the wee little baby kicking me from the other pretty consistently for most of the morning.

Sad cooking story.  I made some creamy cauliflower soup a couple weeks ago, and I was standing there waiting for it to boil for what seemed like forever.  I heard Alexa squawk to let me know she was awake from her nap, so I ran back to her room and started changing her diaper.  As soon as her bum was completely naked, I hear the horrible sound of the pot of soup boiling over onto the stove.  It went from nothing to complete chaos at just the right time--all within about 20 seconds.  I had to decide whether to risk her being naked and peeing on something, or letting the soup create a boiling puddle under the stove.  Ughh.  Then, after boiling the soup for a while I had to blend it. Proceeded to blend the soup, at which point the top blew off the blender and covered me, Alexa, and half the kitchen with boiling soup.  It seriously went EVERYWHERE!  And right then Kyle walked in the door.  Good times.

Alexa loves the little cloth nativity we have (Marmie, Emily and Sara, it's the same one I made for you guys a couple years ago.  Sweenys, it's the same as Mom's).  I was vacuuming last week and she was freaked out by the vacuum, so she just stood by the couch holding baby Jesus and watching me with a scared face.


She has started to argue, and we think it's absolutely hilarious.  She responds in a high pitched voice, and never uses real words when she's arguing.  It's always babble, but stern babble like she's trying to make a point and help us understand her side of things.  I need to video it.

We watched a friend's almost 5 month old baby a couple weeks ago, and it was a lot of fun to see Alexa interact with him.  She loved helping take care of him and feed him his bottle, push his swing, etc.  She would get so mad when I would take her away from the baby to eat dinner or change her diaper.  She would cry and call out his name.  And then she asked for him every day for the next week. 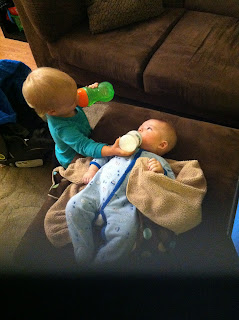 She continues to talk like we can't believe.  She says "cheese" for pictures, and we got a cute recordable card for Uncle Craig / Elder Swingle for Christmas and she said "love you Uncle Craig" on the card.  Ahh, it was so adorable.

She must have eaten something that didn't agree with her the other week because she had her first pukepocalypse.  Poor girl.  She woke up in the middle of the night and I couldn't get her to fall back asleep after like 45 minutes of rocking and cuddling.  Put her back in the crib and she threw up everywhere.  So, dad took a shower with her and we got her all cleaned up and curled up next to me in bed.  I finally got her to fall back asleep at like 5am after hours of misery.  She was in the weirdest position by the way--on her back with her legs draped over my big belly, arms across my chest, and her head in my armpit.  It looked really uncomfortable.  Anyway, she had been asleep all of 10 minutes when she turned her head and threw up in my eye while still asleep.  I'm not sure if the puking woke her up or my reaction to the fact that she had just thrown up IN MY EYE!!!  There were many baths, showers, and much laundry done that day.